POISON’s BRET MICHAELS Brings Photographers Back To The Pit In Miami - “Aim Your Cameras At What Matters, The Audience Behind You... And Stay Here For Longer, I’ll Pay Whatever Fine Is Needed" 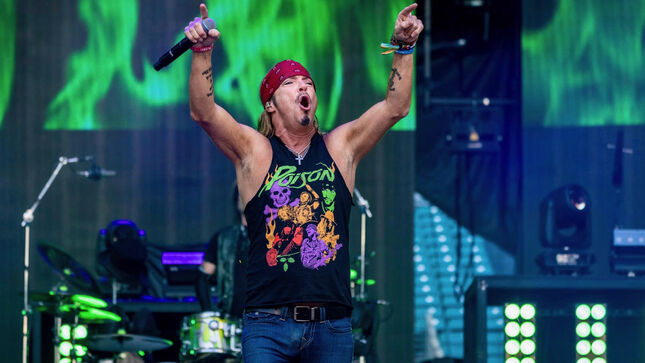 The much-awaited “The Stadium Tour” featuring Mötley Crüe, Def Leppard, Poison, Joan Jett & The Blackhearts, and Classless Act is in full swing after more than 950 days since it was originally announced, with the first three shows in Atlanta, Miami and Orlando scoring thousands of fans in attendance.

And precisely during the Miami event this past Saturday at the Hard Rock Stadium, Poison frontman Bret Michaels sort of stole the show after the band’s second song was over and the press photographers were exiting the photo pit.

“Photographers, stop right there,” Michaels said addressing the pros leaving as they were permitted to photograph only two songs of each band instead of the customary three. “Come back and aim your cameras to the pictures that really matter, the beautiful audience in front of all us. These people here are the reason why we are still doing this after all these years, and let me tell you all, that if I wasn’t playing in this stage, if Poison wasn’t playing, I’d be in the audience watching this tour like you all are.”

“Stay here for another song,” he continued while the photographers came back to the photo pit in disbelief, with some of them climbing the barricade to get better shots at the crowds roaring in front of them. “I’ll pay whatever fine is needed, let’s continue with this party!”

Definitely a class act gesture from Michaels, who is known for his amicable demeanour on-stage, frequently coming to the first rows, shaking hands and fist-bumping with the closest fans.

"The Stadium Tour" marks the Crüe's first live dates since wrapping its 2014/2015 farewell tour. Crüe toured with Poison back in 2011 and Def Leppard teamed up with Poison for a string of road dates in 2017, but this jaunt marks the first time all four acts have hit the road together for an extended tour. See below for a the itinerary of the remaining dates.