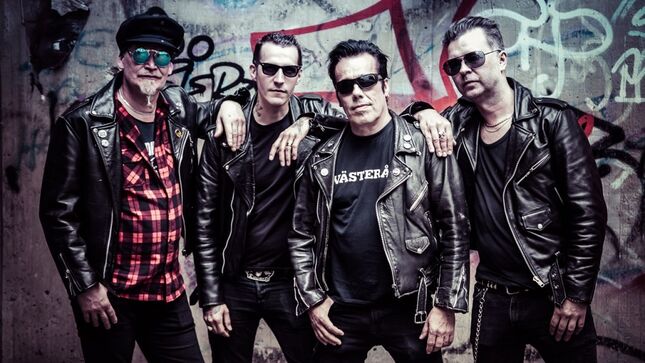 Scandinavian rockers Psychopunch have released a cover of the holiday season standard "Last Christmas" by Wham!. Check out the official video below.

In April 2020, Psychopunch released a very special video for their song "I'll Be Home Tonight". Read on what vocalist Jarmo has to say about it:

“In these uncertain times we live in at the moment with the COVID-19 virus, no shows, no entertainment and with people having to stay at home for their own safety, I came up with an idea that I talked to my good friend Dirk ‘The Pixeleye’ Behlau about and he loved the idea.

“We asked people we played with, worked with, know and respect if they want to be part of a new video to one of the songs (‘I'll Be Home Tonight’) from our latest album Greetings From Suckerville.

“Everyone just filmed what they wanted - singing, playing, drinking, whatever - and film it with their mobile phones so that Dirk can edit it the footage, creating a full-length video.

“Unfortunately, not everyone had the time to participate since they are busy working with other stuff at home and we couldn't ask everyone.

“But I'm really happy that so many had the time and took the effort to be part of this, like Schmier (Destruction), Majsan (Thundermother), Dregen (Backyard Babies/The Hellacopters), Jonas (At The Gates), Beef Bonanza (The Bones), Nitrogods or Andy Brings (Double Crush Syndrome), among others. Thanks a lot, stay safe and healthy and enjoy this ‘lockdown edition’ masterpiece of a video!”