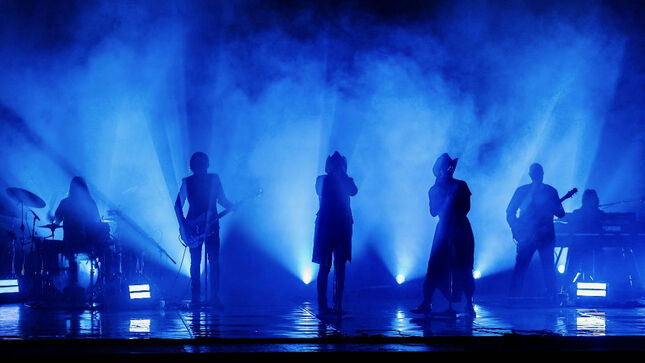 Puscifer, whose October 2020 concert film, "Existential Reckoning: Live At Arcosanti", broke online attendance records and fully explored what the at-home concert experience could be, celebrate the Halloween weekend with the release of two concert-meets-feature films: "V Is For Versatile: A Puscifer Concert Film Featuring Music From The V Is For… Era” and “Parole Violator: A Puscifer Concert Film Featuring Conditions Of My Parole”. Watch the trailer below. 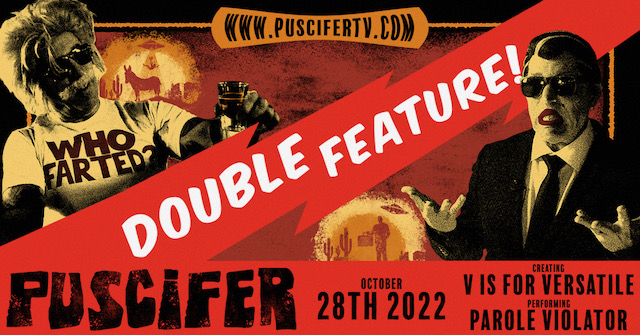 Meeting at the intersection of music and theater, Puscifer is known for their thematic, multimedia-laced tours. From a “Hee Haw”-style jamboree to a televangelist revival, from sitting ringside at a Lucha Libre match to the advent of Agent Dick Merkin and the Pusciforce, Puscifer’s transition from live performances to film is a natural extension of the music-meets-acting troupe. The pandemic-induced dawn of the at-home concert experience provided Maynard James Keenan, Mat Mitchell and Carina Round with the tools to turn to film, having now released two movies to date: 2020’s “Existential Reckoning: Live At Arcosanti” and 2021’s “Billy D And The Hall Of Feathered Serpents Featuring Money $hot By Puscifer.”

“Those with creative minds are restless. Lockdown was only physical, not mental,” offers Keenan. “The Pandemic was the perfect springboard and opportunity for us all to flex our creative muscles. Here is more evidence.”

V Is For Versatile: A Puscifer Concert Film Featuring Music From The V Is For… Era: Puscifer take you into the famed studios of Los Angeles’ Sunset Sound, where everyone from Led Zeppelin to Van Halen to Elton John and Tom Waits recorded classic albums. In this live performance piece, the band invites fans behind-the-scenes as they re-interpret and re-record songs from their V Is For… Era. Agent Dick Merkin, Major Douche, the briefcase and a few surprise cameos are interspersed amongst the studio footage.

Parole Violator: A Puscifer Concert Film Featuring Conditions Of My Parole: Billy D is in jail, Hildy is on the war path and Peter Merkin, as usual, is up to no good. The saga of the Bergers continues as Puscifer pairs the duo’s ongoing melodrama with a live, track-by-track re-imagination of the band’s critically-acclaimed 2011 album, Conditions of My Parole. Visually, “Parole Violator” is evocative of Keenan’s North Arizona homestead, with Puscifer’s performance married to striking visuals, dramatic lighting, and in a nod to the band’s 2011/2012 tour in support of the collection, closes with a campfire sing-a-long.

The films, which premiere on October 28 at 12 PM, Pacific/3 PM, Eastern/8 PM, UK/9 PM, EU, remain on-demand for 72 hours. Tickets as well as a selection of limited edition merchandise, exclusive to attendees, are available now via puscifertv.com. Early bird tickets are on-sale through October 21.