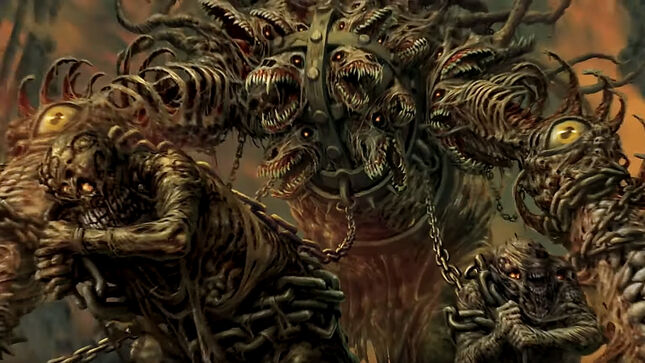 Swedish-Spanish death metallers, Putrevore, have launched a visualizer video for the song "Vortex Devourer" as a second advance single from their imminent fourth album, Miasmal Monstrosity, which will see the light on October 5 via Xtreem Music on CD, 12" LP, cassette & digital formats. Watch the video below.

Formed in 2004 by Dave Rotten (Avulsed, Holycide) and Rogga Johansson (Paganizer, Ribspreader), Putrevore has been forging its heavy, dense and brutal sound through three albums and two split EP's. In Miasmal Monstrosity, the band has perfected their sound, and while the current fashion, when it comes to dark and heavy death metal, is based on imitating Incantation, Putrevore continues its own vision creating a perfect album where both the own band's name and the album title, perfectly define what the nine songs included here sound like; A sound that's incredibly brutal, heavy, dense, crushing, intense, dark, putrid... Rogga's vicious and morbid riffs, along with Dave Rotten's monstrously decomposed and inhuman voice and Brynjar's intense and crushing drumming, make Miasmal Monstrosity possibly the most overwhelming death metal album of the year.

And if this was not enough, Russian artist Daemorph Art has created an incredible art for the front cover of this album, clearly, unsurpassed.