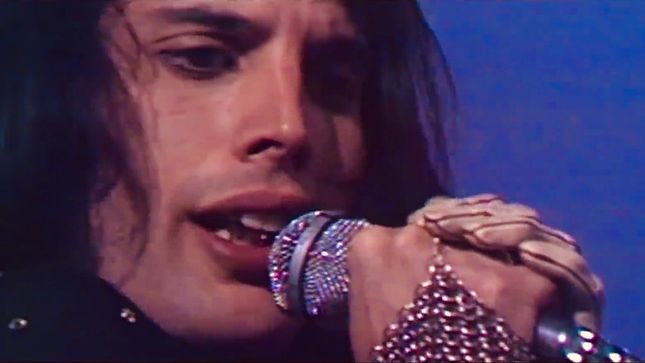 An official karaoke-style lyric video for the Queen song "Liar" can be seen below. Originally titled "Lover", the song was featured on the band's 1973 self-titled debut album.

The official teaser trailer for the Queen biopic Bohemian Rhapsody is now available for streaming below. The film will be released on November 2nd.

Bohemian Rhapsody is a foot-stomping celebration of Queen, their music and their extraordinary lead singer Freddie Mercury, who defied stereotypes and shattered convention to become one of the most beloved entertainers on the planet. The film traces the meteoric rise of the band through their iconic songs and revolutionary sound, their near-implosion as Mercury’s lifestyle spirals out of control, and their triumphant reunion on the eve of Live Aid, where Mercury, facing a life-threatening illness, leads the band in one of the greatest performances in the history of rock music. In the process, cementing the legacy of a band that were always more like a family, and who continue to inspire outsiders, dreamers and music lovers to this day.

The clip below features on set and behind the scenes stills taken from the Bohemian Rhapsody movie.

Greg Brooks, Queens’ Official Archivist was part of this process and he worked with the band and the movie production team on a daily basis for months to re-create every tiny detail of each scene and to make it as authentic as possible.

"My role was to give the Fox ‘Props’ team access to authentic Queen tapes, notes, handwriting, memorabilia, costumes and photographs - anything and everything remotely useful - which they could then create replicas of, to dress various sets."

"Working on this project with such a brilliant gathering of dedicated talented people, was a rare privilege. Fox have created a Queen universe that is scarily convincing. It is real in every way that it could reasonably be."