RAVEN Frontman JOHN GALLAGHER On METALLICA Supporting Them On Tour In '83 / '84 - "It Sounded Like MOTÖRHEAD Played At The Wrong Speed; Like, 'Alright, This Sounds Good, Let's Take These Guys'" 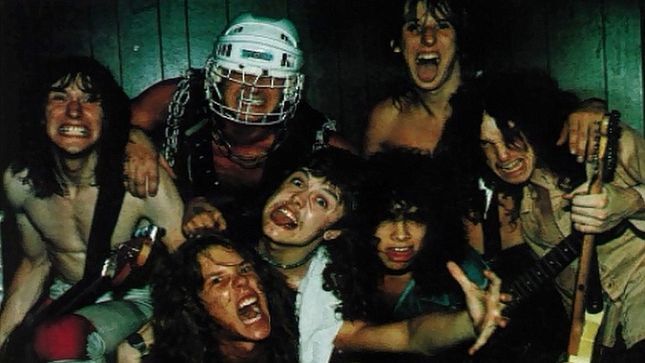 During a recent interview with Ultimate Guitar's David Slavković, Raven frontman John Gallagher talked about Metallica opening for the band back in 1983 and 1984. The trek marked Metallica's first-ever tour. You can check out the conversation below. An excerpt from the interview is available below.

UG: In 1983, you went on your first big tour and Metallica went with you. What were they like back then and what was it like touring with them?

Gallagher: "That was our first US tour. We got the offer to do a tour in America. And (Megaforce Records founder) Jonny Z said, 'I've got this great opening band for you, the biggest band in San Francisco.' And we're like, 'What?! Y&T are opening for us?' 'No, not Y&T. Metallica.' Like, 'Who?' And then we heard the music and it sounded like Motörhead played at the wrong speed. Like, 'Alright, this sounds good. Let's take these guys.' So we did. That was their first tour - opening for us in America.' And it was chaotic and crazy and a lot of fun."

UG: What were James, Kirk, and Lars back then compared to now? You played with them in 2014 in Sao Paulo. How can you compare those three guys back in '83 and now?

Gallagher: "The surprising thing was that they haven't changed that much, considering the life experience they've been through and how much older they are. Obviously, James is a man now, and before he was a little kid basically with a can of beer in his hand laughing all the time. That's all he ever did, he would just giggle and drink beer.

And, of course, back then, the older influence - even though he wasn't that mature - was Cliff [Burton]. It was like an old soul on young shoulders. So it was great. Me and Cliff would sit and discuss music and play riffs at each other with basses and, 'What about this, what about this...' He was very cool."

When Raven left the Skråen stage at the end of November 2017 after their acclaimed concert in Aalborg, Denmark, brothers John (bass, vocals) and Mark Gallagher (guitar) along with new member Mike Heller (drums) didn't foresee their show being recorded for posterity.

"We were surprised of course, since nobody had informed us of this beforehand," John Gallagher explains. "We had a flash drive with the recording delivered to us and when we checked it, we realized that - barring some small technical problems - we had a truly magical live recording on our hands. It was a near perfect concert thanks to the great atmosphere inside the hall and our out of control attitude - since, you know, we weren't aware the show was being recorded."

It's the unbridled show of a band who has been writing metal history for the last 45 years.

As to the differences between the current Screaming Murder Death From Above: Live In Aalborg and earlier Raven live recordings? "We have of course gotten better and better on a technical level over the years. Also, on Destroy All Monsters/Live in Japan (1996), you can clearly hear that I was wrestling with voice issues due to a bout of laryngitis. And if you compare Screaming Murder Death From Above: Live In Aalborg with Live In The Inferno from 1984, it almost seems as if we had taken sedatives back then", Gallagher says laughingly and concludes with: "The Aalborg recording matches the energy which Raven is exuding 100 percent. It's the best representation of us as a live band yet."

"Screaming Murder Death From Above: Live In Aalborg will be released through SPV/Steamhammer on January 18th as CD DigiPak, 2LP Gatefold, download and stream. Check out the live single / video for the song "Hung, Drawn & Quartered", released today (January 4th), below.

"Destroy All Monsters"
"Hell Patrol"
"All For One"
"Hung Drawn And Quartered"
"Rock Until You Drop"
"A.A.N.S.M.M.G.N."
"Tank Treads (The Blood Runs Red)"
"Faster Than The Speed Of Light"
"On And On"
"Break The Chain"
"Crash Bang Wallop"