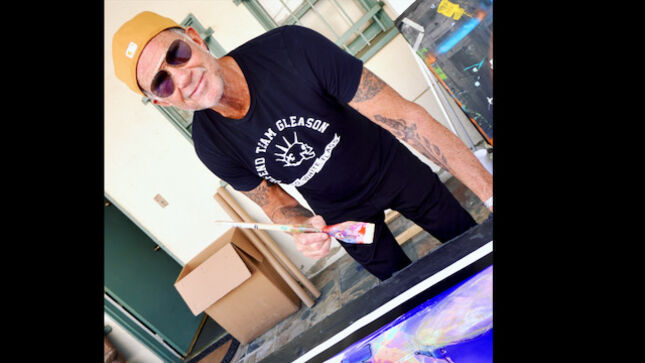 MvVO ART, creator of Ad Art Show, announced that Chad Smith will be the featured guest artist and host of the Ad Art Show 2021. The virtual opening is May 3, 2021 at 4 PM, EST on MvVO ART.com during Frieze Week. Artworks by Chad Smith will be exhibited on the monumental screens of the Oculus at Westfield World Trade Center the final weekend of the show (May 29 & 30, 2021).

“Ladies and gents… boys and girls. Coming this May there is going to be a whole gang of colorful art at the oculus in NYC and I’m so happy and excited to be a small part of Ad Art Show 2021. See you there!” - Chad Smith 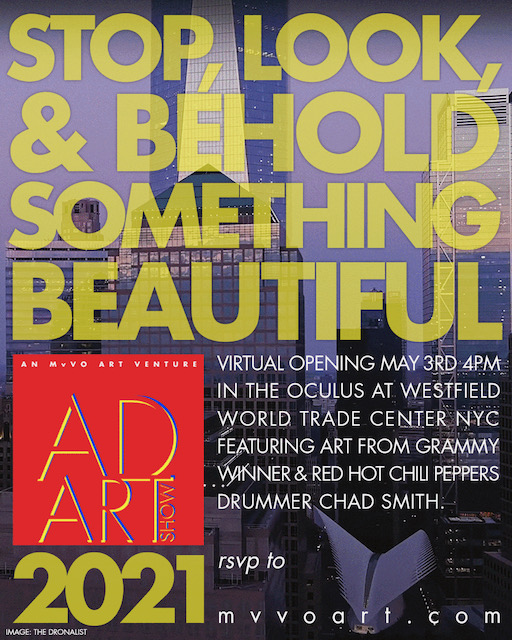 The synergy and work ethic that marks Smith’s musical life organically led to his painting, and in early 2016 Smith entered the art world with Parallax, his first collection of rhythm driven prints. Fast forward to 2019, and the Artists’ premiere of an extraordinary new collection of artwork which tours the United States in venerable galleries and venues, often following the Red Hot Chili Peppers concert tours and allowing for Artist Appearances in which the Artist has the opportunity to meet his Collectors.

This collaboration with Ad Art and Road Show Company, the industry-leader in traveling fine art exhibition, is yet another creative outlet for Smith, and one in which he is rapidly becoming renowned, respected, and critically acclaimed. Each hand-embellished work is crafted from rhythm. As a painter uses brushes with oils of different colors, Chad Smith works with drumsticks to capture light in a variety of ways; crafting rhythms that translate to very unique artwork. Another feature of this exhibition will be a collection of Original Mixed Media on Drums; works created by printing one of Chad’s art images on a drum skin. It is then embellished and signed by Smith.

In 2014 Smith received a presidential appointment by President Obama as a Turnaround Artist for public schools due to his work as a passionate advocate for music and arts education.

In April 2012, the Chili Peppers were inducted by Chris Rock into the Rock and Roll Hall of Fame, an honor that humbled Smith.

Clearly, Chad’s own public-school success story, generous time and inspiring life paved the way for his 2014 appointment as a Turnaround Artist under the President’s Committee on the Arts and Humanities. “I really want kids to pick up instruments so they can see how fun it is to play,” he relates. “It’s important to have technical proficiency—in anything, there’s practice and hard work, no shortcuts—but if you love it, you’re gonna wanna do it. I want them to see that after all these 40-ish years, I still love it, that’s why I still do it. It’s fun. It has taken me everywhere—and beyond.” He’s also devotes energy to non-profit organizations including, MusicCares, Silverlake Conservatory of Music, (Paul Newman)’s Serious Fun Network, and Children’s Hospitals.

Upon reflecting on his life, Smith can hardly believe his good fortune. “I work with people who want to grow; the Chili Peppers are open to new directions and as an artist, it’s the best creative situation to be in. It’s simple: I love what I’m doing and I’m really lucky. I got pretty good at the music thing,” he says humbly. “I play gigs in little bars and big stadiums, and every one is rewarding”.

About Chad's Art:  “I think that this is a really exciting new medium which is important and will stand the test of time and will be timeless.  Music, sound, visualization…all of those things go hand in hand and have through the history of art.  My hope is that its’ the emotion, the fluidity and intensity that come across…. and of course the way that this medium utilizes the lighted sticks is really something that is totally unique…you'd don't play with lighted sticks every day and to see that is to really visualize the motion and the emotion that go into it: therefore, my personality comes through”.