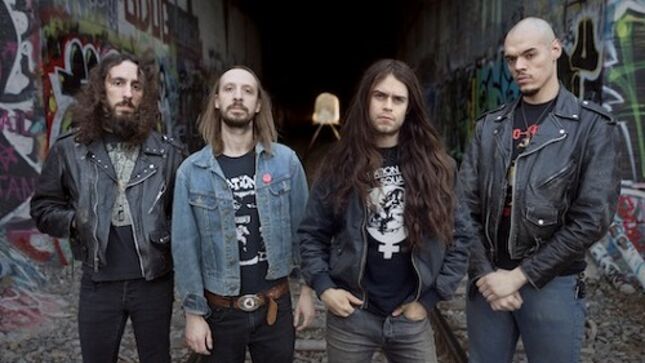 Reunited thrashers Mantic Ritual have signed with M-Theory Audio. New music from the reunited group – featuring original members Dan Wetmore (vocals/guitars), Jeff Potts (guitars), and Ben Mottsman (bass) alongside new drummer Carlos Cruz (Warbringer, Exmortus, Hexen) – will be released later this year, but the first taste of the new riffs to come will be unveiled with a live performance on August 26th at Supply & Demand in Long Beach, California.

"This is Dan Wetmore with the first Mantic Ritual news in over ten years! We have reunited and are working on a new EP for later this year via our recent signing with M-Theory Audio. With over twelve original songs already written, this will set the path for an imminent full-length album next year. Reviving Mantic Ritual isn’t something we’re taking lightly, we intend to best our debut album, Executioner, in every way. The new material is true to our roots in heavy metal, thrash, speed and punk. This is in our blood and it’s time to share with everyone. Mantic Ritual is ecstatic to work with M-Theory Audio and thankful for the opportunity furnished by Founder/President, Marco Barbieri. Cheers!"

The early beginnings of Mantic Ritual were birthed in the band's hometown of Pittsburgh in 2005. Performing initially under the name Meltdown, the group began building a buzz with Northeast heavy metal fans over the next two years with their combination of boundless thrash enthusiasm and superb songsmanship. The band moved across the country to Los Angeles in 2007, where performances alongside leaders of the budding Southern California thrash revival such as Warbringer, Fueled By Fire, and Merciless Death earned them attention from discerning metal audiences and a record deal with Nuclear Blast Records.

The group soon changed their name to Mantic Ritual, and released their first – and so far only – full-length record Executioner, produced by Andy Classen (Asphyx, Tankard, Krisiun) in 2009. Mantic Ritual followed up the release of Executioner with live touring alongside heavy metal titans such as Rotting Christ and Destruction, before dissolving in 2010. Potts and Mottsman later went on to join Warbringer for their 2013 release, IV: Empires Collapse, with Potts himself also performing on Gygax's 2018 release, 2nd Edition. Potts, Mottsman, and Wetmore began writing and recording new music together - with Cruz (still a member of Warbringer) now joining them on drums – in the beginning of 2021.

The group's upcoming live performance on August 26th at Supply & Demand in Long Beach, CA – their first since a one-off reunion at Thrasho De Mayo 2013 in Los Angeles - is only the beginning of this exciting new chapter in the story of Mantic Ritual. More information on new music from Mantic Ritual will be unveiled in the weeks to come by M-Theory Audio.