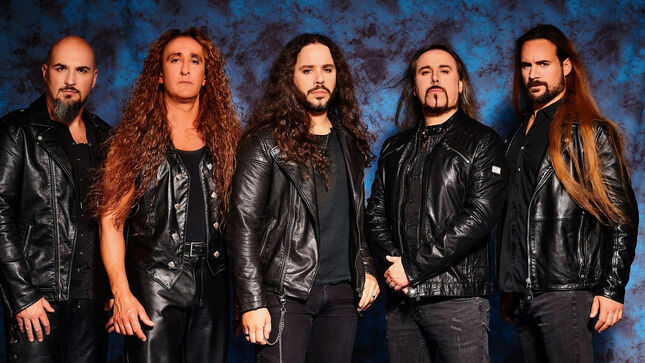 Italy's Rhapsody Of Fire will release their new album, Glory For Salvation, on November 26 via AFM Records. Watch the video for the new single, "Chains Of Destiny", below. The album can be pre-ordered here.

Says Alex Staropoli about the new single: "'Chains Of Destiny' is an epic, uplifting and intense song, characterized by catchy melodies, fast paced rhythm, great vocals and choirs." He adds: "We always wanted to shoot a videoclip on the Alps and finally we did it. The amazing rocky mountains displayed in the videoclip are just a few hours away from our home town Trieste. Being able to show how beautiful this territory is to the entire world make us very proud.

We decided to make this shooting happen around Fall, so we would get some low clouds, light rain and wind. It turned out the coldest weather we could imagine. Altitude of almost 2.000 meters on the sea level and temperature touching the zero, it was truly an epic challenge for the band and the amazing crew we had."

The distinctive voice of frontman Giacomo Voli will make Glory For Salvation not only a glorious, grande part of their trilogy, which started with their 2019 album The Eighth Mountain, but a captivating and true metal masterpiece. The energy of each band member is flowing with precision and fury, opera choirs intersect with Voli’s superlative vocals in a cinematic orchestral polyphonic escalation towards the highest epic musical peaks. The deeply inspiring solos by guitarist Roby De Micheli and Alex Staropoli’s magic orchestrations once again create the film score metal at its best!

The album artwork was created by Alex Charleux.

"I'll Be Your Hero" lyric video: