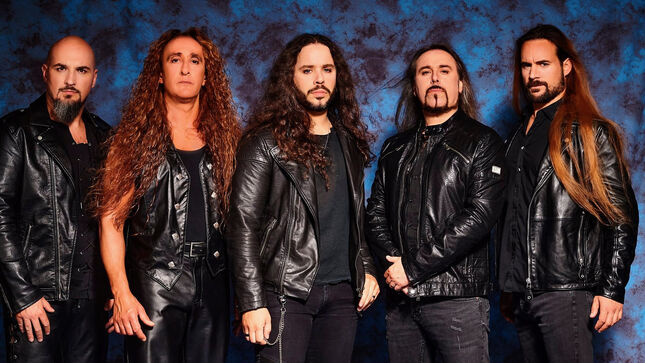 Italy's Rhapsody Of Fire will release their new album, Glory For Salvation, on November 26 via AFM Records. A lyric video for the first single, "Glory For Salvation", can be seen below. The album can be pre-ordered here.

The distinctive voice of frontman Giacomo Voli will make Glory For Salvation not only a glorious, grande part of their trilogy, which started with their 2019 album The Eighth Mountain, but a captivating and true metal masterpiece. The energy of each band member is flowing with precision and fury, opera choirs intersect with Voli’s superlative vocals in a cinematic orchestral polyphonic escalation towards the highest epic musical peaks. The deeply inspiring solos by guitarist Roby De Micheli and Alex Staropoli’s magic ochestrations once again create the film score metal at its best!

The album artwork was created by Alex Charleux.

"I'll Be Your Hero" lyric video:

Rhapsody Of Fire recently checked in with the following update: "We are proud to announce that we will be touring all over Continental Europe in January/February 2022 and will be performing songs from our upcoming album, Glory For Salvation in addition to our most iconic anthems! We will be accompanied with special guest Nightmare and opening act Phantom Elite (+ warm-up bands Existance and Manigance in France), which will make each of those shows very special and epic for the fans of the genre".