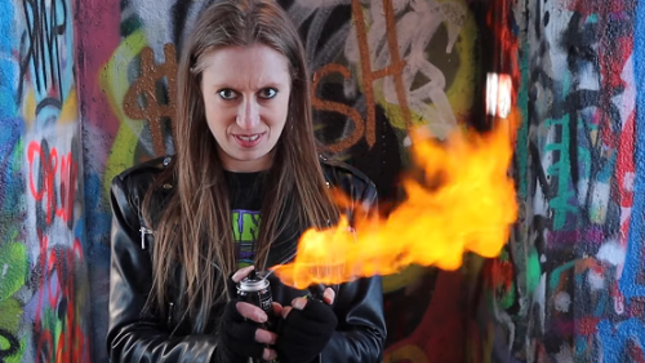 The Philly punk scene is a powerful thing. It should come as no surprise that this bastion of hard hitting punk rock would be a lodestone for some of the best metal punk talent in the world!

Such was the case for vocalist / guitarist Phillipa Tank of California Motörhead tribute band Motorbabe, and now frontwoman of the hard hitting punk thrash band, Roadkiller. After an initial burst of shows, Roadkiller quickly recorded their self-titled debut EP, a record fated to make your ears bleed in all the right ways. Created with the goal of fusing punk, hard rock and crossover thrash whilst still remaining uniquely Roadkiller, Phillipa is on a mission to write songs to get your blood pumping. With dreams of constant touring and a dedication to quality songwriting, Roadkiller is more than just another punk band. We are witnessing the birth of a well oiled machine, representing the magic of all the underground has been and will be.

Phillipa Tank shares: "This is the second single off of my upcoming record Pick Of The Litter, featuring the inimitable Dave Witte (Municipal Waste, Melt Banana, Discordance Axis) who nailed my song 'Slicker Than Oil'. We shot down at Graffiti Pier, directed and filmed by my awesome crust-lord, drone pilot friend, Botgrinder."

Dave Witte adds: "Phillipa Tank's Roadkiller songs are rocking and full of energy. It was really fun to play the tune and film a cool video to boot! Also to be included among a really great group of drummers playing on the record is equally as exciting."

2022 will see the release of Roadkiller's first full length record, Pick Of The Litter, featuring stacked guest spots of iconic drummers across the heavy music spectrum.

Phillipa Tank is Roadkiller. Phillipa is the vocalist, singer and composer of the music and lyrics of all of the songs on the record. She is also the guitarist and founding member of all girl Motörhead tribute band, Motorbabe.

Five guest drummers participated in the recording of the upcoming Roadkiller album, Pick Of The Litter: Dave Witte (Municipal Waste), Jess Margera (CKY), Donald Tardy (Obituary), Tommy Akerholdt (Turbonegro) and Adrian Aguilar (Exmortus). Phillipa invited each drummer to record a song that best fit each drummer's style of playing. Each session was filmed and a total of five videos will be produced.