ROB HALFORD Contemplates JUDAS PRIEST's Legacy - "We're Leaving A Lot Of Stuff For People To Enjoy, To Be Inspired By, To Be Uplifted With"; Video 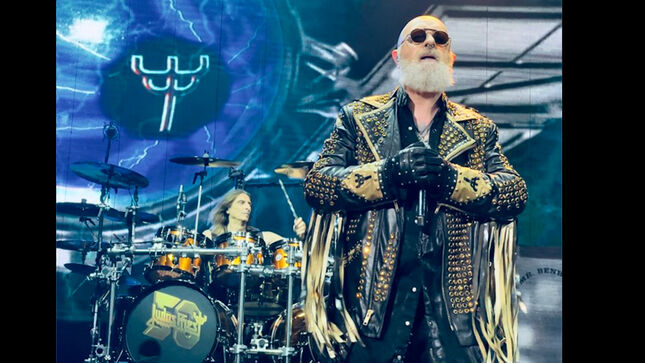 Sonic Perspectives contributor, Robert Cavuoto, had the honour of interviewing Rob Halford for an insightful look at his success, pursuing his dreams of stardom, and becoming a spiritual person. Halford also offers an update on the new Judas Priest album, and discusses the importance of being inducted into the Rock And Roll Hall of Fame, and what it meant to him to be standing shoulder-to-shoulder with all the band members who deserved to be there. Watch below:

Judas Priest, received the "Musical Excellence" award at the 2022 Rock And Roll Hall Of Fame induction ceremony, held on November 5, 2022 at the Microsoft Theater in Los Angeles, CA. The event aired on HBO on Saturday, November 19.

The Rock & Roll Hall Of Fame YouTube channel has released the "Inductee Insights" video below, stating: "Through several decades, #RockHall2022 Inductee Judas Priest has proven that heavy metal is an art form and consists of a community where all are welcome. Take a closer look in this next episode of Inductee Insights, Powered by PNC Bank."