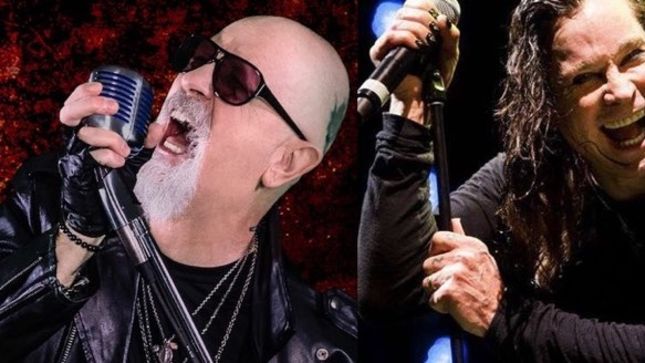 August 26th, 2004 was a landmark moment for heavy metal - well, maybe only for a few. OZZY OSBOURNE was forced to sit out BLACK SABBATH’s performance at Ozzfest in Camden, NJ due to an attack of bronchitis. Sharon Osbourne asked JUDAS PRIEST frontman Rob Halford to cover for the ailing Ozzy, a job he had done previously during the grand finale of Ozzy’s No More Tours tour in November 1992 in Costa Mesa, CA after Ronnie James Dio (Sabbath’s singer at the time), refused to open for Ozzy.

If you can’t get enough of Ozzy Osbourne, you might be surprised to hear that you can play the self-titled NetEnt game at some of the best slot sites. Die-hard fans will even be able to appreciate a bonus round which features the infamous bat head.

Halford spoke to BW&BK recently about the incident that wasn’t too well-received by Ozzfest patrons.

“I was shitting myself I was,” the Metal God laughs. “I got through that show by the skin of my teeth. Thank god for the auto cue. When Sharon called me up, she says ‘You’re on in three hours.’ I didn’t know when it was gonna be.”

‘I’m great - thanks for the luggage.’

‘Well, that’s not really what I’m calling about.’

‘Ozzy’s got a crumby voice and he’s not feeling very well. Can you help out?’

‘Well I have to clear it with the rest of the band first - Glenn (Tipton), KK (Downing), Scott (Travis) and Ian (Hill). If it’s all cool and kosher I’ll do it. When do you want me to do it?’

‘Oh, you’re a big Sabbath fan. You know all the songs. You’ve done it before.’

“Yeah in Costa Mesa - whatever year that was, I said to myself.”

‘Can you send a courier (of the video) of last night’s show?’

“So, I literally did watch it on the tour bus, from the hotel to the venue, singing a-cappella with Ozzy. I just went through it barely once. Did the Priest gig. I’m getting cleaned up and getting changed and then Zakk Wylde bursts in and starts going ‘This is gonna be wicked, fuckin’ rock on! I’m with ya brother!’

‘Zakk, I need like five minutes to chill here.’

“I love Zakk - he’s larger than life, but... So I went out there and met Tony Iommi inside this black curtained-off area.”

Tony: ‘Are you alright Rob?’

‘Yeah, I think I am. What’s going to happen?

I said, ‘Is that the right thing to do?’

"We let Bill do his thing - saying he had a note from Ozzy. ‘I’m really sick ... but I’m not performing tonight.’

“I would have felt the same way.”

And surely Dio has felt the same way…

“Yes, but I think this HEAVEN AND HELL thing is brilliant. It’s great that it’s Black Sabbath featuring Ronnie Dio, the Dio years. If you are a Black Sabbath fan, you want to see Ozzy. If you are going to see Priest you want to see Rob. And that’s no disrespect to Tim (“Ripper” Owens). I love Tim to death. Without Tim everything would’ve ground to a halt. The band kept going and I will always be grateful for Tim for doing that. It’s the mentality of the fan-base. You want to see the real deal.”

Back to the Camden show, Halford remembers: “So when I went out and started doing the first Sabbath song, a bit of spit hits me and a bottle whizzes past my head. And I go, ‘Holy shit, am I going to get through the first number before I get knocked out?’ But as it was, they were great that crowd. They understood. What else can you do? You’re either going to see something or you’ll get nothing at all. So I thought the crowd was absolutely fantastic. It was a bit of rock/metal history, wasn’t it? Very unexpected and out of the blue. Afterwards my body was humming for days. Priest is my first band and it always will be. It was just a thrill to do.”

'Paranoid' with Rob Halford on vocals: