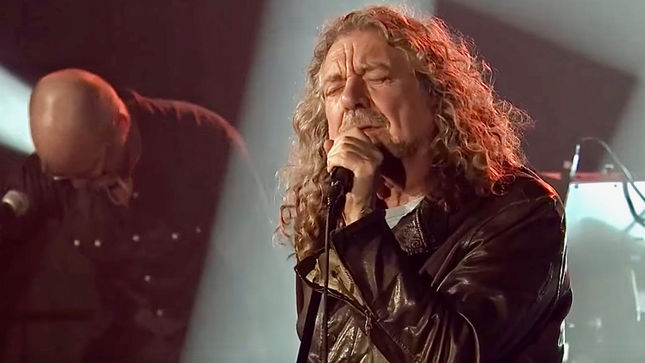 On Tuesday, October 17th, Led Zeppelin's legendary singer Robert Plant guested on The Howard Stern Show. It was Stern's first time interviewing Plant. They discussed Led Zeppelin at length as well as touching on Plant's solo career, meeting Elvis Presley, and he tells the story of stealing all of The Who’s food at a performance of Tommy. Check out the clips below, head here for the full 90 minute interview.

Being constantly asked about reuniting the legendary Led Zeppelin, frontman Robert Plant shoots down the notion in a new interview with the Daily Telegraph.

“You can’t ever really go back,” says Plant. “It’s tough enough repeating yourself with something that’s a year old, never mind 49 years old. I’ve got to keep moving.”

He also speaks about musicians who won’t give up touring and who go through the motions with a tone of horror, although discreetly won’t give any names. “That look of abject boredom… I can’t imagine anything worse.”

Plant’s new album, Carry Fire, is out now via Nonesuch/Warner Bros. at all music retailers and streaming services. You can order the album here.

Plant’s eleventh solo album and first full-length release since 2014’s lullaby and...The Ceaseless Roar, was produced by the singer in the west of England and Wales, at Top Cat studio in Box, Wiltshire with additional recordings at Real World and Rockfield studios.

Plant and the Space Shifters are also joined on Carry Fire by a number of special guests. Chrissie Hynde joins Plant on the duet “Bluebirds Over The Mountain” (written by rockabilly legend Ersel Hickey and later recorded by both Richie Valens and The Beach Boys). Albanian cellist Redi Hasa performs on three tracks, as does the celebrated Seth Lakeman on viola and fiddle.

Plant, who lived in Texas for a time before returning to his native England three years ago, together with his friends, present the songs Carry Fire, melding unusual rhythms with naturalism and smoldering power.

“It’s about intention, I respect and relish my past works but each time I feel the lure and incentive to create new work. I must mix old with new. Consequently the whole impetus of the band has moved on its axis somewhat, the new sound and different space giving way to exciting and dramatic landscapes of mood, melody and instrumentation.”

“The May Queen”
“New World...”
“Season's Song”
“Dance With You Tonight”
“Carving Up The World Again…A Wall And Not A Fence”
“A Way With Words”
“Carry Fire”
“Bones Of Saints”
“Keep It Hid”
“Bluebirds Over The Mountain”
“Heaven Sent”

“Bluebirds Over The Mountain”:

“The May Queen” lyric video: