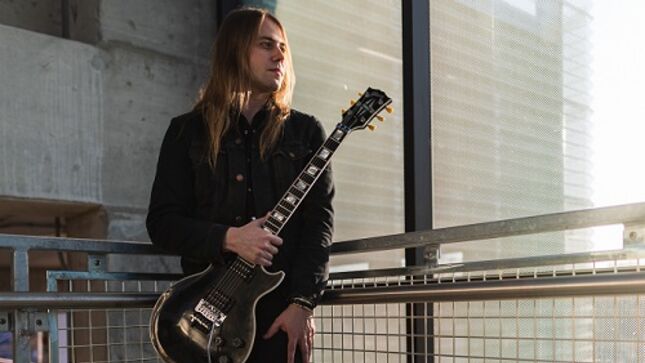 Motor city guitar virtuoso Sammy Boller is back with a ripping new track. The shredder has released his latest song and video for the single “Ritual Lights”, available now via Candyrat Records on all digital service providers. Sammy hypnotizes viewers with his trademark two-handed-tapping talents, and brings gorgeous guitar tones out from behind the shadows as the track soars to euphoric heights.

Written during the Hindu religious festival Diwali, otherwise known as the Festival of Lights, “Ritual Lights” shows Sammy performing guitar fireworks and showcasing his nimble fingers over the course of the three-and-a-half-minute track. Towards the middle of the song, Sammy delivers a jaw-dropping solo with help from a 1970’s wah pedal gifted to him by famed Detroit engineer and producer Al Sutton. In an amazing turn of events, the wah pedal ceased to work after Sammy recorded one take of the solo, providing listeners with a unique glimpse into Sammy’s musical vision and precise recording technique. In the video, Sammy features his black Les Paul Axcess guitar and Friedman BE100 amplifier.

Last year, Sammy released his solo debut, Kingdom Of The Sun – a stunning prog-tinged instrumental love letter to the guitar with blistering pyrotechnics. Music videos for the lead tracks “Kingdom Of The Sun” and “Cloak Of Light” give an up close and personal look at Sammy’s graceful style, and his play-through video for “The Empress” gives an intimate perspective of Sammy’s spectacular technique.

Kingdom Of The Sun artwork and tracklisting:

"Kingdom Of The Sun":

After Joe Satriani selected him as a winner in Guitar Center’s “Master Satriani” class in 2012, guitar virtuoso Sammy Boller has gone on to become an internationally acclaimed player, scoring a Billboard Top 20 hit with Citizen Zero’s “Go (Let Me Save You)” in 2016. In March of 2020, Sammy released his debut solo album, Kingdom Of The Sun. Sammy is sponsored by Friedman Amplification, touring the US and Europe to sponsor clinics and gear demonstrations, and is also a guest columnist and virtual instructor at Guitar World Magazine.