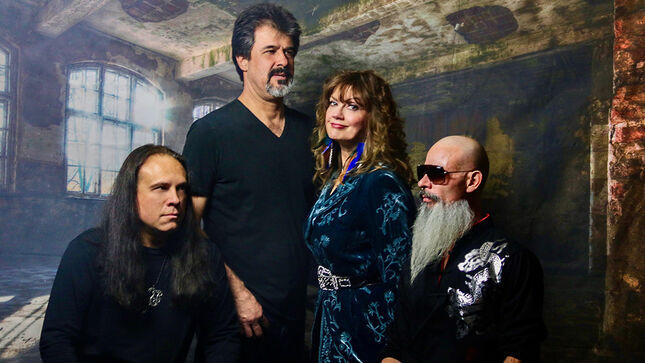 Rockborn’s new single/video, “Rock Me Harder,” serves as a preview of the group’s forthcoming studio album, arriving in spring 2022.

The “Rock Me Harder” single/video sums it all up perfectly. Watch the video below, and stream/pre-save the single here.

“‘Rock Me Harder’ was born out of a couple of rough ideas between John, who had this incredibly heavy riff, and some lyrics I had been toying with for quite some time,” explains Lu. “His riff gave me a shove in the right lyrical direction. I needed the foundation and inspiration that his riffs gave me to finish the lyrics, and of course after hearing Dino and Gary throw in their ingenious licks to John’s riffs, I was able to come up with the melody lines and the phrasing needed to kick this song into gear.

“Overall, this song is a culmination of the synchronicity of all the members of Rockborn. I’m very pleased with the ferocity and impactful energy that John, Dino, Gary and I gave to this very powerful female empowerment song. I hope that everyone, digs on this fantastic groove that Gary and Dino masterfully perform and also the badass riff and the brilliant lead guitar of John. Most of all I want women to know that they deserve what they want and they can have what they want. Just be bold and ask for it, like ‘Rock Me Harder’ does!”

Rockborn is perfectly poised to build upon the buzz created by the Michael Wagener-produced, engineered and mastered previous album, Born To Rock, which spawned the popular video “Reasons Why I Cry,” which has received 2.25 million views on YouTube. “Rock Me Harder” most certainly delivers.