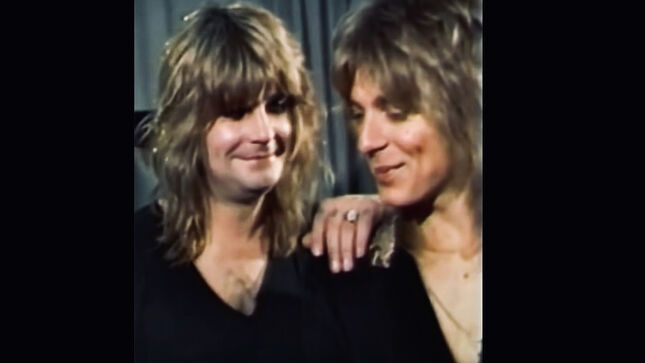 “The first time I saw Quiet Riot was in August 1977 at the Starwood in West Hollywood,” Sarzo says. “I’d just moved to L.A. and was networking. I saw the band perform and went, ‘Wow, these guys are doing an arena performance in a club. They’ve really got it together.’

“I was also super impressed by Randy. There were a bunch of guys in front of him checking out his playing, and also a lot of girls wearing the same polka-dotted bow tie he was [wearing]! He had the perfect balance, the perfect appeal: guys wanted to be like Randy, and girls wanted to be with Randy.

“I thought to myself, ‘That’s a rock star in the making right there.’ I ran into Kevin [DuBrow, Quiet Riot’s vocalist] afterwards, introduced myself and said, ‘Keep doing what you’re doing — you’re going to make it.’ And that was it.”

A year later, Kevin called Rudy to audition, and the rest is now multi-platinum, Quiet Riot history. Speaking of rock history, as you know, Randy left Quiet Riot in late 1979 to join forces with Osbourne after his somewhat unceremonious parting of the ways with Black Sabbath.

He asked Ozzy, ‘What do you want me to write?’ And Ozzy’s reply was, ‘Just be yourself.’ Ozzy gave Randy his freedom

“Randy was destined for greatness, and his mother, Delores, was instrumental in him taking the Ozzy Osbourne gig,” Sarzo says. “She realized it was a huge opportunity for him, even though it meant him leaving both his families – Quiet Riot and also his job at her music school, Musonia. Delores was definitely a big deciding factor ’cause Randy was pretty comfortable teaching eight hours a day.”