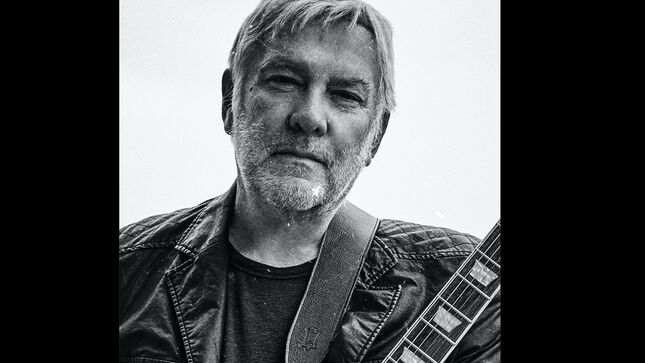 As part of Julien's Auctions' “Music Icons” auction, happening on May 20, 21 and 22, “Property From The Archives Of Alex Lifeson” will feature over 60 vintage guitars and other career memorabilia from the personal collection Alex Lifeson, the legendary Rock And Roll Hall Of Fame guitarist and co-founder of Rush, one of the greatest rock groups of all time, selling more than 40 million records worldwide.

In regards to the upcoming auction, Alex tells Guitar.com, "My wife and I, we’re at a stage in our life where we just feel like we have too much stuff and we’re trying to get a little leaner. I’m auctioning off the bulk of my guitar collection for charity. I’m looking forward to that. It was probably one of the most difficult things I’ve ever done in my life; it was so emotionally difficult packing those guitars up. I cleaned them, polished them, did string changes. I made sure every single one was in tune when it went back in the case, and then I kissed it goodbye."

In regards to his iconic 1976 Gibson ES-355, a guitar synonymous with Lifeson and one that has accompanied him throughout his entire career, he reveals, "That was the last one that was left. I was sitting in our mudroom, just off our garage, while the removal truck was waiting. I sat there with that case in between my legs and, maybe it sounds a little corny, but I was talking to it. I was reminiscing about gigs that we did together and kissing the bubble wrap. But I know that, with the funds I’m hoping to raise, it gives it all another life and helps other people, and in some cases gives people another chance at life. Why wouldn’t you do that?" 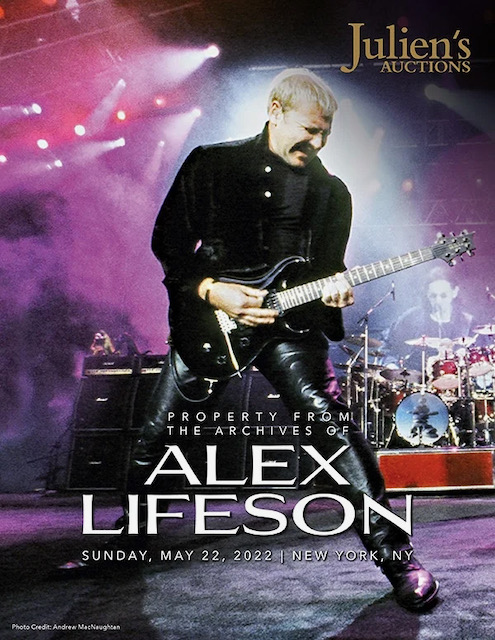 Highlights from the collection include:

* A 1976 custom-built Gibson ES-355TD, aka “Whitey, played by Lifeson throughout most of his career with Rush. “Whitey” is featured on all albums from “A Farewell to Kings” to “Test for Echo,” and can be seen played by Lifeson on stage during all Rush tours from 1977 to 2015 as well as in many of the band’s music videos. This splendid guitar was part of Rush’s most explosive era of creativity. Alex Lifeson: “I purchased this guitar in 1976, it was custom-built in Kalamazoo just for me. It has been my main guitar and is the iconic Alex Lifeson guitar."

* A 1970 Gibson Les Paul acquired by Lifeson during Rush’s inaugural tour and played extensively on all Rush albums and tours from “Fly By Night” and “2112” to “Hemispheres.”

* A 1971 Jose Ramirez acoustic guitar used by Lifeson to record all classical-style tracks on the album “Hemispheres,” including “The Trees” and “La Villa Strangiato.”

* A 1976 Gibson Dove acoustic guitar played on numerous tours and used by Lifeson to write “Closer to the Heart” and other songs from the 1977 Rush album “A Farewell to Kings.”

* A 1976 Gibson J-55 acoustic guitar used by Lifeson to compose Rush’s platinum-selling album “2112” as well as “A Farewell to Kings” and served as the main acoustic guitar on “Natural Science” and “Camera Eye” from “Permanent Waves” and “Moving Pictures.”

* A 1980 custom Hentor Sportscaster played by Lifeson on most Rush albums since “Moving Pictures,” and was the main guitar used on the recording of the album “Grace Under Pressure.” This guitar was favored by Lifeson as his primary instrument for soloing – in particular the solo for the band’s hit single “Limelight,” and can be seen in the music videos for “Vital Signs,” “Countdown,” and “Enemy Within.” The Sportscaster’s heavy yet versatile sound embodies Rush’s bold sonic explorations of the 1980s and Lifeson’s growth as a soloist during this time.

Additional items on offer will include concert and tour ephemera, passes, and photographs as well as original lyric sheets. 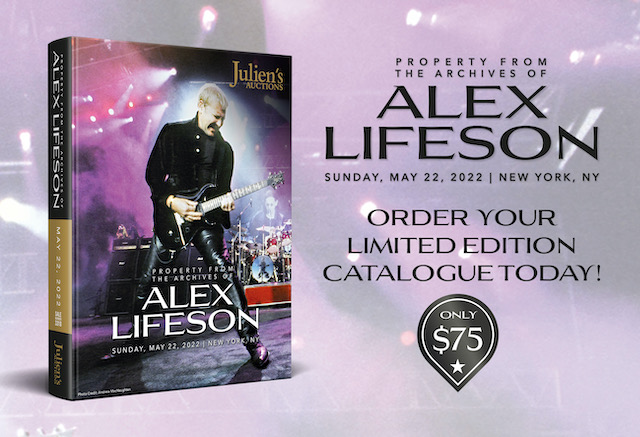