Emerging from COVID lockdown, Swedish metal band Sabaton will tour North America as main support on Judas Priest’s 36-city, 50 Years of Metal trek that starts on September 8 in Reading, PA. The US and Canadian dates will mark Sabaton’s first time sharing a stage with Judas Priest and its first North American tour since 2018.

Sabaton recently announced that prior to the Judas Priest tour, they will top the bill at two major European festivals: July 9 at Exitfest, held at the Petrovaradin Fortress, Serbia, and the Czech Republic's Rock Castle on August 20.

On July 9th, Sabaton performed in front of 40,000 people at Exit Festival in Novi Sad, Serbia. Fan-filmed video is available below.

The spring of 2022 will see Sabaton bring its ground-breaking and breathtaking live shows to 26 cities in 17 European countries - "The Tour To End All Tours." The complete itinerary is below; for all ticket purchasing info, head here.

“Bigger, better, and more metal than ever,” said Sabaton’s bassist Pär Sundström. “We are joining Judas Priest for an eight-week tour in North America this autumn, and guess if we are excited... Until then, COVID-19 can go to hell.”

On the upcoming North American dates with Judas Priest, Sabaton - Sundström, vocalist Joakim Brodén, guitarists Tommy Johansson and Chris Rörland, and Hannes Van Dahl on drums - will focus the setlist on their most recent album, 2019’s The Great War, fan-favorites such as “Primo Victoria,” “To Hell and Back,” “Carolus Rex,” “The Last Stand,” and some surprises. Sabaton is known for its high-intensity, operatic heavy metal, juxtaposed with narratives that recount the harrowing yet epic tales of real-life historical battles and the brave men and women who fought in them.

"History can be very boring because it’s far away and detached,” said vocalist Brodén. “But everybody loves a good story, so what we do is tell stories, personal and true stories.  We paint pictures with our lyrics and music, and our live shows, and try to bring history to life.” 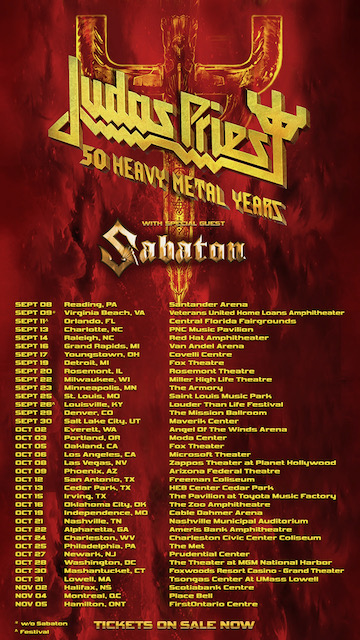 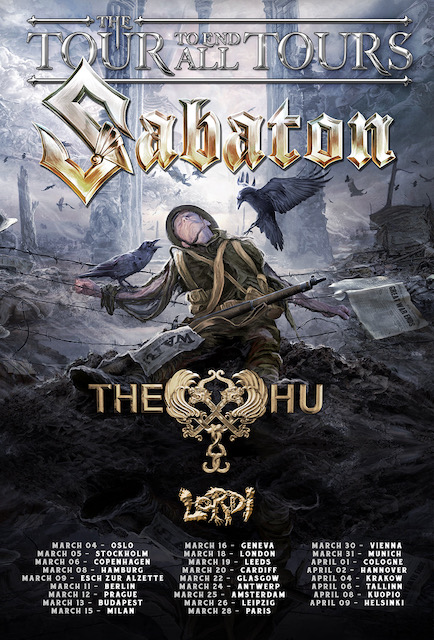