SAMMY HAGAR - "DAVID LEE ROTH Refuses To Acknowledge That VAN HALEN With Me Was Even More Successful Than Van Halen With Him, And That’s Very Stupid Of Him" 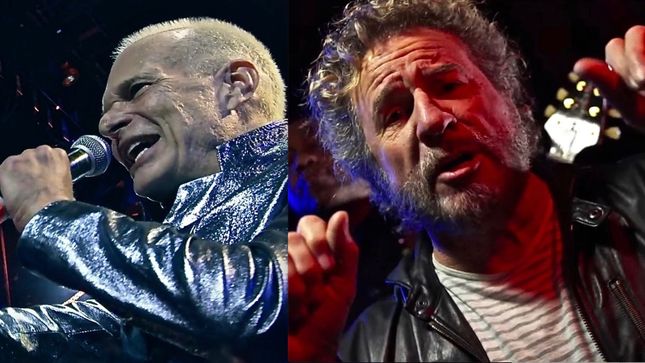 Speaking in Issue 15 of Planet Rock magazine, Sammy Hagar says David Lee Roth “refuses to acknowledge” that Van Halen “was even more successful” during his tenure with the band.

After teaming up with Roth on the seemingly improbable co-headline ‘Song For Song, the Heavyweight Champs of Rock and Roll Tour’ in the summer of 2002, Hagar returned to the Van Halen fold from 2003 to 2005.

Asked about his so-called “rivalry” with Roth in the Confessional feature in Planet Rock magazine, Hagar reveals: “It wasn’t even a blip on my radar.

“I don’t respect Dave’s artistry, but I do think he’s clever and a great showman and what he did with Van Halen in the early days was fantastic. Van Halen couldn’t have made it without him.

“God bless Dave, but he refuses to acknowledge that Van Halen with me was even more successful than Van Halen with him, and that’s very stupid of him.

“That’d be like me not acknowledging what he did for the band before I joined: that would be stupid wouldn’t it?”

Elsewhere in his wide-ranging interview, Hagar revealed what caused the end of his first stint with the band. “We had eight years of (huge success), and then suddenly people in the band started changing... and it wasn’t me and it wasn’t Mike (Anthony),” Hagar said.

“The Balance record was like pulling teeth, things got very dysfunctional by then. Drugs and alcohol and insecurity and bad management killed that band.”

You can read the full in-depth Confessional interview with Sammy Hagar in Issue 15 of Planet Rock magazine, which is on sale here.