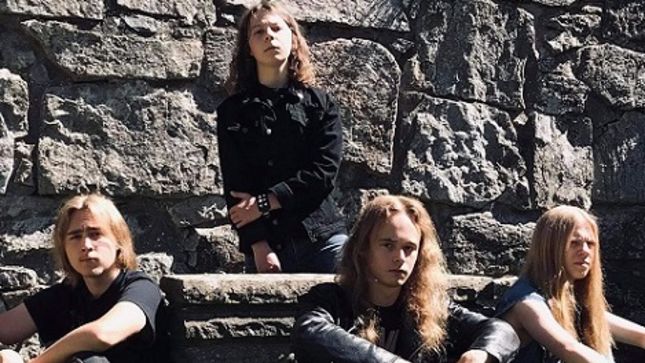 Swedish deathrash upstarts Sarcator have revealed their new track "The Hour Of Torment". The song is the first to be revealed from the band's self-titled debut album, Sarcator, set for international release on October 30th via Redefining Darkness Records. Hear Sarcator's "The Hour Of Torment" in its entirety at Bandcamp, where all formats can be pre-ordered, as well as on Spotify.

Upon listening to this album blindly, one would imagine a band of 30- or 40-something long-hairs that have been stalwarts of the metal scene since the early '90s and have been doing it so long, they have the formula down to a pointed science. This is melodic Swedish death leaning heavy on its Teutonic German thrash origins so much so that it would make any Sodom fan smile from horn to horn...

But there's just one catch: the rippin' guitars you hear are being manhandled by a mere 16 year old, while the eldest ranks in at a ripe old 20! We should also mention that it is no ordinary 16 year old: it just happens to be the son of guitarist Marko Tervonen of Swedish death greats The Crown! Now is this all beginning to make sense? While the other members fill the gap between the youngest and eldest at just 20 years old, this band has loads of promise... if they can just make it to graduation first!

Redefining Darkness is proud to bring you the debut album from Swedish death/thrash legends in-the-making, Sarcator! So pick your chin up off the floor, crank the stereo to 11, and let this band of Goonies take you on a thrash metal ride to Swedish death heaven!