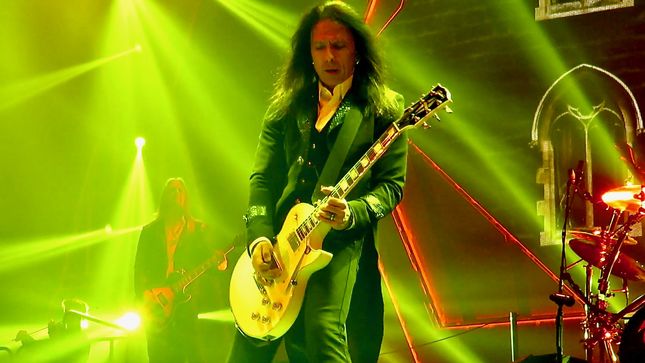 In a new TrueMetal.it interview with Al Pitrelli (ex-Megadeth, Savatage, Trans-Siberian Orchestra) that will be published in the next few days, the guitarist talked about the possibility that Savatage will return to activity:

Q: Many hoped that the concert in Wacken meant an imminent return of the band to the stage. Is there any news about it? Have you ever talked about it among yourselves? Have any of you written any new music?

Al Pitrelli: "Jon Oliva is a fantastic musician and is always working on new music, constantly sending me new songs and new ideas. When we work for TSO we sit down together at the piano and listen to his ideas for new Savatage songs. We always talk about doing something, I would like more than ever to get the band back together and back on tour. I know the fanbase in Europe would be delighted, and it would be nice to be able to do that. Yes, we talk about it a lot and I think one day we will because, as I told you, the world changes in a moment and I don't want to one day have the regret of saying, 'We should have done it when we could!' Let's try to live to the fullest and not wait to do something, let's do it! I can't wait for that day... I don't have a date, an hour, or an exact plan, I just know that we all want it very much."

Q: So at the moment there haven't been more concrete discussions with agents or promoters?

Pitrelli: "That's right, for now it's just chatter between us, we're just a bunch of friends saying, 'Dude, it would be nice to pick up and tour.' Until recently we were saying, 'Okay, now let's finish the winter tour and then start planning a spring tour, or a new album, or the next winter tour', really, it's a full time job just to keep the car running. It's the Trans-Siberian Orchestra, and in the midst of it we were like, 'It would be nice to go play in Europe in the summer', there are so many possibilities.

"Like I said, sometimes life takes over, like when you hang out with your best friend and you say, 'Wow, why haven't we talked to each other in three years? Ah, right, I've had children, you have had children...', you know, sometimes life gets in the way, particularly as one gets older and other responsibilities take over. What I do know is that we all talk about it often, particularly now that we have a lot of time to talk. The conversation is still open, I spoke to Chris Caffery just this morning, he greets you, by the way. Jeff Plate, Johnny Lee, we all talk about it all the time, it's just a matter of saying, 'Okay, let's leave this pandemic behind and focus on the important things in life!'"