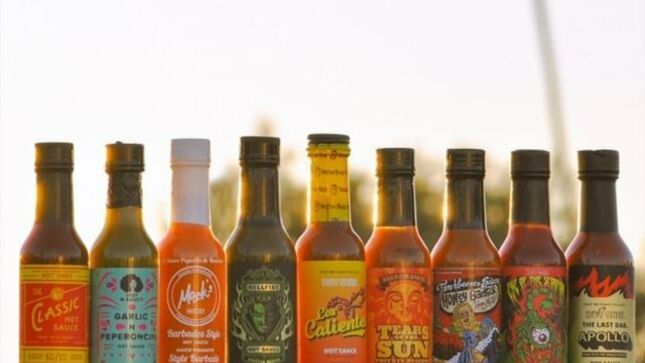 Guitarist Chris Caffery (Savatage, Trans-Siberian Orchestra) has checked in with the following update:

"This is really awesome! Not only is it National Hot Sauce Day today (January 22nd), but my Tears Of The Sun hot sauce has made it to Season 14 of the super cool and really hot TV show, Hot Ones!

This is the Private Reserve of Tears. It's actually closer to my original recipe. When we first released Tears, Steve Seabury had the idea of making it a little friendlier in the heat level. Tears Of The Sun and his Helacious sauce were the first two we ever released when he started High River Sauces. We have come a long way from the first times we hit hot sauce expos 10 years ago! We showed up as these two kinda loud and excited and sometimes obnoxious metal guys at the shows. In a short period of time, Steve managed to turn High River Sauces into one of the most successful up-and-coming hot sauce companies in the world, presenting hot sauce expos all over America and releasing several award winning sauces. Which includes my Tears Of The Sun, Tears Private Reserve, and Grapes of Wrath recipes / sauces.

A few years ago we decided to release the Private Reserve and use some hotter peppers and kick it up a notch. This is actually my personal favorite version of the sauce. The heat makes it a perfect match for this exciting TV show!

It’s something I am very proud of and want to thank Hot Ones' Sean Evans and Steve for making this happen! 2021 just got cooler and hotter at the same time!

Have a great weekend and make sure you check out all of the award winning hot sauces at HighRiverSauces.com."

Check out Tears Of The Sun here.

Hot Ones is a YouTube web series produced by First We Feast and Complex Media. Its basic premise involves celebrities being interviewed by host Sean Evans over a platter of increasingly spicy chicken wings. Tears Of The Sun Private Reserve will be #6 on the line-up in Season 14. Pick it up for yourself here.