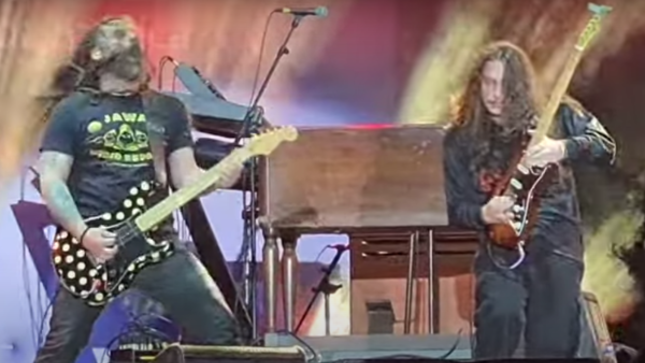 On August 7th, Sepultura guitarist Andreas Kisser's side proje t, Kisser Clan, featuring his 24 year-old son Yohan, performed at eFestival in São Paulo, Brazil. Check out their rendition of Metallica's "The Call Of Ktulu" below.

On June 22nd, Sepultura announced that Kisser had left the band's "Quadra Summer Tour Europe 2022" to return home due to a family emergency.

On July 3rd, Kisser shared the tragic news that his wife, Patricia, lost her battle with cancer. She was only 52 years old. Andreas and Patricia married in 1994, and had three children together.

On July 27th, Kisser rejoined his band on stage at the Festival de Inverno de Garanhuns in São José, Santa Catarina, Brazil. Professionally filmed video of the concert can be enjoyed below. During his period of mourning, Andreas had temporarily been replaced on tour by Project46 guitarist Jean Patton.

"Welcome back, Andreas Kisser! Last night at Festival de Inverno de Garanhuns (FIG), we were rejoined by our brother after no doubt one of the most trying times in his life. Thank you so much for the warm welcome. We look forward to playing across our home country of Brazil for the next month."