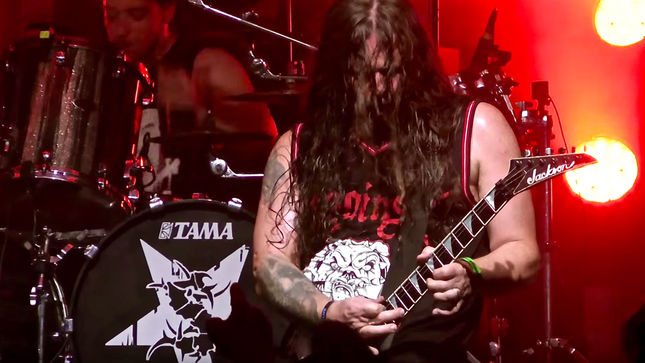 Australia's Sticks For Stones caught up with Sepultura guitarist Andreas Kisser to discuss the band's new album, Machine Messiah. During the conversation, Kisser was asked if he listens to former Sepultura frontman Max Cavalera's music:

Kisser: "I have no reason not to listen to what he does. He made the albums with Soulfly and Cavalera Conspiracy and different projects here and there and stuff, and, of course, I listen. But we are doing very different stuff nowadays. We are in different worlds, although we play metal, but we are doing very different things. Which, I think, that's why he left Sepultura; to do stuff different from what we do. And that's great, I think it's a very healthy territory."

In early 2017, German thrash giants Kreator will tour Europe in support of their upcoming record. Legendary guitarist/singer Mille Petrozza and his crew will be accompanied by a varied as well as iconic billing. Sepultura are announced to be direct support to the headliners, followed by visionary Swedish melodic death metallers Soilwork and Belgium’s finest death/grind outfit, Aborted.