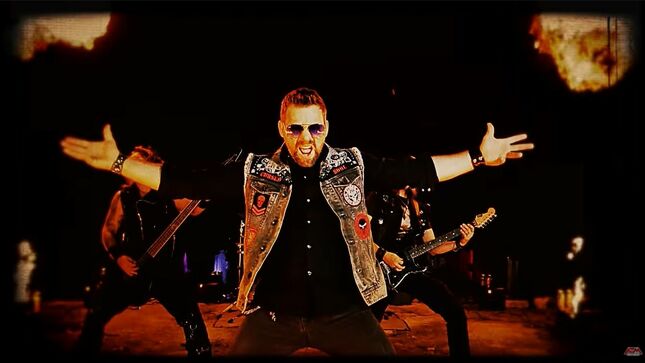 Serious Black returns with a new singer and a new album. The second single from Vengeance Is Mine is the power metal anthem, "Rock With Us Tonight". Vengeance Is Mine will be released on February 25 via AFM Records.

One of the new songs on Vengeance Is Mine is called “Album Of Our Life” and hits the nail on the head in several respects. On the one hand, the international power metal band surrounding bassist and founder Mario Lochert has succeeded in creating what is probably the most powerful and imaginative work of its career so far, with loads of great guitar riffs, grooving rhythms and anthemic melodies. On the other hand, the album’s lyrics venture into territories previously uncharted by the band.

Lochert: “This time, I have allowed more insights into my emotions and private life than ever before, i.e. into how I think, how I feel, how I am, and how difficult it can be to keep a band going when you yourself aren’t well. The lyrics on Vengeance Is Mine reflect the past four or five years. This, of course, has had an impact on the songwriting, which has become even more intense and emotional.”

Lochert`s assessment that his band has succeeded in creating a masterpiece in Vengeance Is Mine is based on the band’s latest addition: Nikola Mijic, a powerful singer from Serbia who, after a successful guest appearance with British act Eden`s Curse, has become Serious Black’s new frontman. Mijić has replaced the group’s former vocalist Urban Breed, who had announced his departure in spring 2021.

Lochert: “To be honest, we were pretty stunned when Urban left during the songwriting for Vengeance Is Mine, but of course, we wish him all the best for the future. Since we didn’t want to lose any time due to Urban's departure, we immediately set about looking for a new singer while continuing to work on the new material.”

Lochert: “We have been close friends with Henning and Bob for years, so we were of course very happy that they helped out.”

Vengenance Is Mine was produced and mixed by Lochert in the 'Serious Black-Studio' in Kirchseeon. "This time we really turned every adjustment screw to get the best possible result," says Lochert and continues: "I think the great effort has been worth it!"

"Rock With Us Tonight":