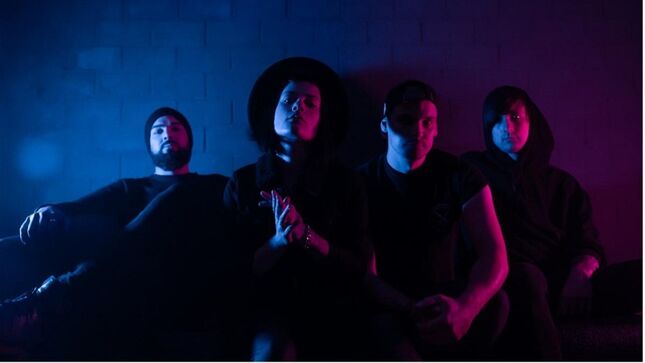 German metalcore powerhouse Setyøursails recently announced their second album and label debut, Nightfall, marking a riveting start with their first single, "Ghosts", featuring Annisokay frontman Rudi Schwarzer. Today, the newcomers from Cologne are back with another unforgettable new song, "Mirror", which will have fans of bands such as Bring Me The Horizon, Annisokay, Bad Omens, I Prevail and Wage War clamoring for more from this exciting new artist on the rise.

Accompanied by a brand new, intense music video packed with visually flashing cinematics, “Mirror” showcases Setyøursails’ trademark mixture of metalcore, death and classic hardcore elements that will blow your mind. The song maintains the versatile vocal expressions of frontwoman Jules, ranging from vicious screams over powerful singing to compressed whispering and aggressive respiration encased by raging drums, heavy guitars and a hard-hitting breakdown that will leave your head banging!

Setyøursails about “Mirror”: “'Mirror' reflects an inner conflict with yourself. It describes the struggle to find meaning in life and how you fail in the end. It deals with the fear of death and that you can find no support for yourself in religious approaches. This is made clear especially by the line 'all my gods are dead' in the breakdown part.
It's a very personally written, honest song that means a lot to us and we are very proud to finally be able to present it now. We really hope that some people can find themselves in it."

Setyøursails on the video: “We shot the video for 'Mirror' right around the corner from our rehearsal room, at the height of summer in the 'Kantine' in Cologne. Not even the 45°C on the day of the shoot stopped Jules from coming to the set in a turtleneck sweater and leather jacket. But after a short, sweaty photo shoot, both items of clothing were exchanged for a shirt.”

Nightfall stands as an impressive return for Setyøursails, who once again prove their musical diversity. A mixture of catchy choruses and intense breakdowns are evident on brutally melodic "Why", the changing spectrum of "Deadline", and "Into the Storm", which starts with a crisp deathcore intro. Among others, "Nightfall" (featuring Andy Doerner of metalcore veterans Caliban) shows the full straightforward range of Jules Mitch’s vocals, which oscillate between concise and clear, intense screams and expressive growling. "Mirror"begins atmospherically before bubbling up to an impressive journey through personal conflicts without losing its undeniably catchy quality. With tracks like "Secrets" and "Forgive Me" the band also presents its softer side. Setyøursails are also full of surprises – together with Mike Perez from No Bragging Rights, they cover "Shallow” (from the film A Star Is Born) by Lady Gaga and Bradley Cooper, and give the ballad their personal touch, once again proving their musical diversity. Nightfall was produced, recorded, mixed & mastered by Annisokay vocalist/guitarist Christoph Wieczorek and songwriter/producer Julian Breucker at Sawdust Recordings. Both have already worked with greats like Beyond The Black, Eisbrecher and Emil Bulls – just to name a few.

Setyøursailsabout their new album: “This album is the most honestly written work we could get out of ourselves. It reflects the struggle of dealing with oneself, fear and life itself. It's dark, it's loud and it hurts. But most importantly - it's true.”

Nightfall will be available in the following formats: