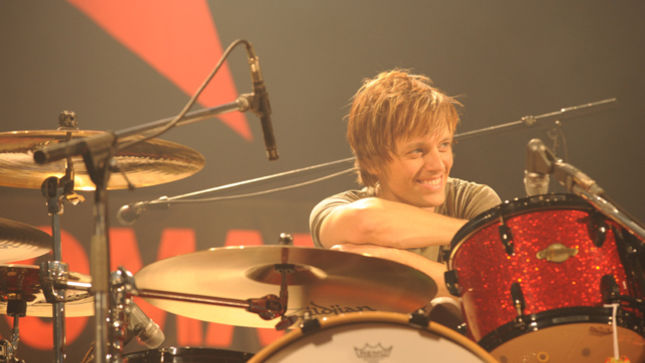 A promotional video for the song “El Niño Overture”, with multi-angle footage from a recent Japanese drum clinic, can be viewed below:

"It’s been a dream of mine to do my own instrumental record and take on the task of playing all the instruments. It’s finally come to fruition and I’m pretty stoked about how it turned out”, says Gaalaas. “I had an absolute blast writing, playing lead guitar, bass and messing around with soft synths. "Bitter Suites...." is a true labor of love - I spent a lot of time writing the songs and tweaking the arrangements as well as engineering, producing and mixing the whole thing. To top things off, some of my best friends came through with great guest contributions. Blessed to know some amazing players!"

Bitter Suites From The Red Room is a testimony to Gaalaas’ wide open approach to music, touching on everything from modern metal and heavy industrial grooves to spacey ethereal sounds and excursions into fusion territory. The album includes the futuristic electronica infused "Silverstrand Station" (see below) and "Tales From A Fantastic Lumbar", a high flying fusion collaboration with keyboardist Peter Fernandes, both previously released as digital singles, along with seven other exciting tracks. Additional guests include Gaalaas’ long-time musical collaborator, Jeff Kollman, and Grammy Award winning B’z band mate, Tak Matsumoto, on guitars.

Originally hailing from small town Innisfail in Alberta, Canada, Shane Gaalaas first left his mark after graduating L.A.’s Musician’s Institute with honours when, upon a recommendation by Deen Castronovo, he landed the gig with Swedish guitar god Yngwie Malmsteen, followed by a stint with the Michael Schenker Group, as well as tours and albums with Vinnie Moore, Uli Jon Roth, and Glenn Hughes, among others.

In the late 90’s, he was a founding member of highly regarded progressive triumvirate Cosmosquad as well as extreme metal quartet Diesel Machine. In 2002, he was approached to become a studio and touring musician with Japanese superstars B’z whose record sales have topped 100 million copies. Gaalaas has been a part of every B’z recording and tour every since.

To date, he has recorded upwards of 70 songs with the band; he issued his first drum instructional DVD, Perfect Rock Drumming, in 2009.