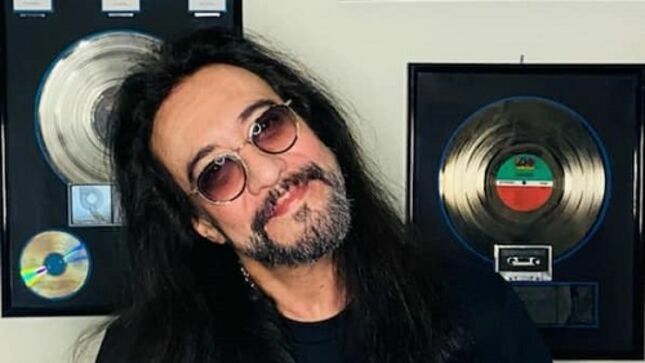 On July 20th, Skid Row bassist Rachel Bolan guested on In The Trenches With Ryan Roxie, and during the interview he discussed the recent passing of Cinderella guitarist Jeff LaBar, who died at 58 years of age..

LaBar's cause of death has not been made public. He was found dead by his wife, Debinique Salazar-LaBar, on July 14th inside his apartment in Nashville.

Bolan: "The first few times I saw Cinderella was at a club called the Galaxy - a little bar in New Jersey - and he wasn't even in the band yet. Eventually there was changes made, and then Jeff was in the band. The whole makeup and the energy on stage... Eric (Brittingham / bass) and Tom (Keifer / vocals, guitar) were there from the beginning, and they had their thing, but when Jeff joined the band it just took on a whole new energy. It was really cool.

He was always just a really genuine guy and, obviously, a very good player. He actually filled in for Snake (Dave Sabo); Snake had an issue with his arm. He was 'Dude, I can't even pick. I can't even hold on to a pick....' so we called Jeff and he came in and filled in for two shows. And it was fun. Road dog stories. It was great. He's gonna be missed, man. Everybody was sad to hear about that."

Inspired by his brother Jack to pick up the guitar, he joined the local rock band Cinderella, who rose to prominence in the late 1980s with a string of platinum selling albums. The group toured the world and had numerous charting songs and videos on MTV. Cinderella had an exceptionally strong fanbase in Japan, which was particularly special to Jeff as that’s where his mother June was born and raised. He would always take her and their family in Japan to the band’s shows there, a life highlight for both mother and son. As Jeff got older, a love of music shifted to a passion for the culinary arts, with his cooking inspired by June’s Japanese heritage. He would reinterpret dishes that were standards in the La Bar household and add a unique flair.

Following a move to Nashville in 2004, Jeff quickly surrounded himself with a community of dear friends who he loved to host and cook for at his home there. He never forgot his Delco roots though and stayed close with all those he grew up with in the region. While he became a bit of a fan of the Tennessee Titans when he moved to Nashville, Jeff’s number one sports franchises were in his hometown, number one being the Philadelphia Eagles, as he never missed the team’s games and would always text his dad Bob during them. He would always make time to talk to his mom for hours every Sunday on the phone, reminiscing and listening to stories about June’s days growing up in Japan. He planned on moving back to Delco as his parents got older, and his mother was excited to have him return with his cooking.

Jeff inspired many of his friends and family to get into music, notably his son and pride and joy, Sebastian. He was eternally proud of the man and musician his son became and looked forward to working on a music project with him. Sebastian visited his father in Nashville often and loved playing music with Jeff and hearing about adventures from the old days when he was on the road. An animal lover, Jeff rescued cats, spent time taking care of his fish and adored his cat Loki.

In addition to Sebastian, Jeff is survived by his wife and best friend Debinique, with whom he created an internet radio show ‘Late Night with the La Bars,’ his parents Bob and June, brothers Jack (Alice) and David (Victoria), sister Diane (Jason), sister-in-law Lisa and many nieces and nephews. Jeff was like a second father to his siblings Diane and David growing up. Although he had many admirers, Jeff was an even bigger fan of his family and friends, seeing the absolute best in everyone he met. Rarely was there a picture of Jeff without a smile on his face. Jeff was an incredibly loving human being and will be missed beyond measure. Immediate arrangements are private and a Celebration of Jeff's Life is being planned for close friends and family.