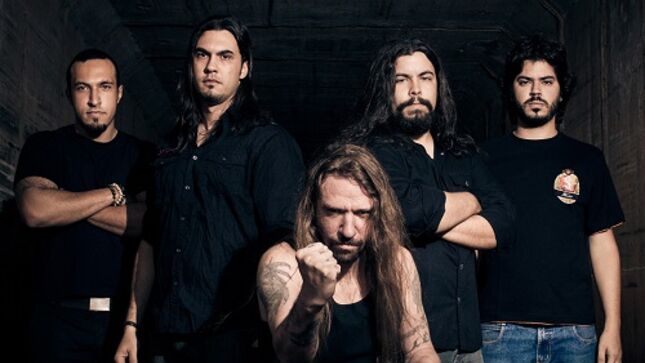 Brazilian metallers Slasher have released their new song "End Of The Road". It's available on all media platforms, and can be heard below.

The recording sessions took place at Casa 39 in Campinas, Brazil during September of this year. The single was mixed and mastered by Rodrigo Couto.

The cover artwork is a creation of guitarist Lucas Aldi, who commented: "The road brings multiple interpretation possibilities about the personage's journey. Its composition with complementary colors reinforces the idea of transitioning and hope of one's destiny. Is this post-apocalyptic universe a reality or just a creation of your mind?"

The inspiration for the lyrics brings a terror plot. "The lyrics have an open meaning. Briefly, it's about survival, and with a philosophical approach, it goes further. It could be about overcoming a tough situation in life, in craziness, farewells, and even the belief of life after death," commented Wellington Clemente, who rejoined the band as bass guitarist.

Clemente is a music veteran who previously performed with the band from 2009 to 2014. He played bass on all the band's records, except for the 2018 single "Experience", recorded by former bassist João Pedro Castro.

Slasher is currently working on the follow-up to their Katharsis full-length from 2014.