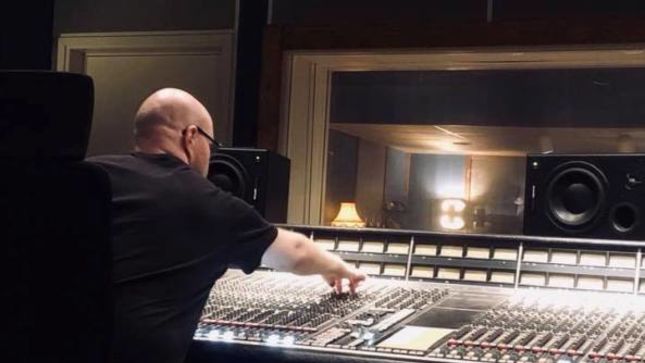 Soilwork vocalist Björn "Speed" Strid, who also fronts The Night Flight Orchestra, has checked in with the following update:

"Off with the white suit and on with the black trench coat. The recording of new Soilwork album starts today. This will be epic."

The band has entered Nordic Sound Lab studios in Skara, Sweden to begin recording their eleventh album. Their previous release was The Ride Majestic, issued in 2015. The new album is due to be out by the end of the year via Nuclear Blast. Stay tuned for updates.

After taking the world of rock music by storm with last year's surprise hit, Amber Galactic, which also got nominated for a Swedish Grammy in the process, and leaving people speechless after a breath-taking first European tour in November/December, Swedish classic/progressive rock supergroup The Night Flight Orchestra have completed the works on their impatiently awaited next album.

NFO Air submitted the following message from outer space: "The Night Flight Orchestra returns with another chapter in their steaming space opera that began with Amber Galactic. This time, the female space commanders want even more revenge than they already had, space is even more infinite, and the amount of champagne it takes to keep this navy afloat and adrift in the cosmos is probably illegal on most planets!

"Never looking back, The Night Flight Orchestra boldly goes where no man or woman has ever gone before, and with this album, they've taken another step in their quest to elevate classic rock from being a music genre to becoming an immersive whole-body transcendental experience!

"It's time to prepare yourself, because the riffs will be riffier, the vocals will be throatier, the synthesizers will envelop you, the AOR will be AOR-ier, the long songs will be longer, the short songs will be shorter, the bass will seduce you, the drums will destroy you, the groove will hypnotize and paralyze you. Can you handle it?"

The as-yet-untitled album was again produced by the band themselves and was recorded at Handsome Hard Music / Larsson Music Studio as well as Nordic Sound Lab in Skara, Sweden. Mixing duties were taken on by the band's guitarist/percussionist Sebastian Forslund and mastering was done by Thomas ”Plec” Johansson at The Panic Room.