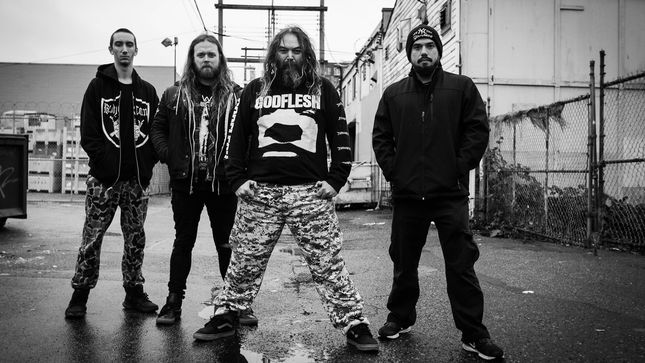 Metal icons Soulfly are set to unleash their devastating new album Ritual, on October 19th via Nuclear Blast. To celebrate on the day of release, fans are invited to listen to the new ​record with Max Cavalera and Zyon Cavalera at the Affliction​ studios in Seal Beach, CA (1799 Apollo Court, Seal Beach, CA 90740). The event will be hosted by Jose Mangin ​and will have Borracho Tacos​ outside for purchase. $10 cash/card at door gets you entry + Ritual CD, poster, event laminate + your chance to win a LTD signature series Max Cavalera guitar from ESP Guitars. Doors are at 7 PM.

Soulfly recently announced their first tour in support of the album, which will take place next January/February.

Joining them are Montreal based melodic death metallers Kataklysm, as well as Incite, Chaoseum, Alukah, and Skinflint.

Commented vocalist/guitarist Max Cavalera: "Fuck yeah! We’re finally getting ready to tour America and Canada! We have the almighty Kataklysm and thrash masters Incite with us to pulverize city after city, night after night! We are gonna destroy everything that comes in our path! Join us and let the ritual begin!!!"

Tickets go on sale everywhere on Friday October, 19th at 10 AM local time. Purchase links will be available at soulfly.com/shows so check back for details. Confirmed dates are listed below.

"Dead Behind The Eyes" visualizer: