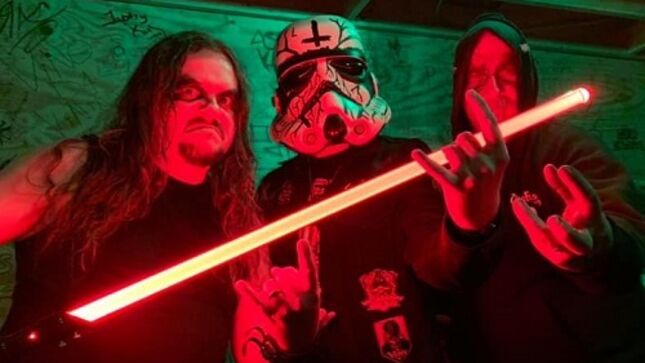 Originally hailing from Korriban, but now stranded in Atlanta, Georgia, Ecryptus plays Star Wars themed death metal and they have a new EP ready for metal heads across the galaxy. The release of Kyr'am Beskar’gam (Mandalorian for Death Metal) follows two demos (2002/2004), The Continuum LP (2005), Astral Crusades EP (2008), and a 7-inch single Rancorous (2018/2020). Each of these tells tales of the Dark side and its crusade against the tyranny of the rebel forces.

On Kyr'am Beskar’gam, four force reckoning tracks will tell stories of the Canon Arcane and will urge you to conscript to the dark side. The EP is due out January 14, 2022 via SBDC Records (Slamming Brutal Death Community). Check out the following EP teaser and feel the force flow in your veins.

Once live shows are a regular occurrence again, the epic Imperial galactic death metal of Ecryptus is not to be missed. During their dramatic rituals, they wear armor and robes and dress the stage with trophies from recent death marks.