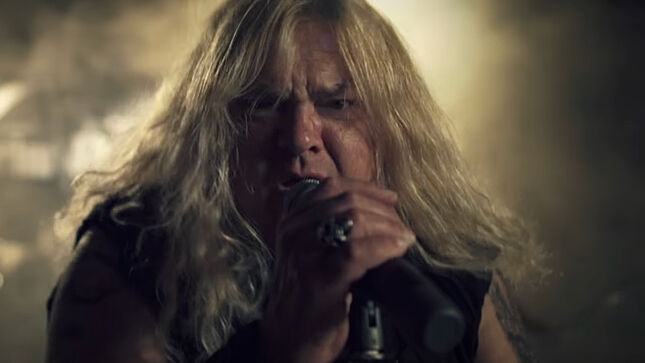 Steve Grimmett passed away earlier this month at the age of 62. Canada's The Metal Voice spoke to Grimmett's wife / former manager Millie Grimmett, who provided fans with updates surrounding the passing of her husband and advised on funeral arrangements as well as Steve's love for all his fans. Watch below.

On Steve Grimmett's passing: "First just say to thank you to everybody, the support has just been overwhelming really. Within the first 12 hours of announcing it I must have had 3,000 messages. I think within the first 12 hours it was very difficult obviously because we're just trying to get our heads around what happened. We weren't aware that Steve was ill. Steve wasn't aware he was. Which I'm pleased about because it meant that he didn't die worrying or feeling ill or thinking he's going to die any day or any of that.

"Steve was still grieving his brother, he never got over his death, which is nearly four years ago now. This was his middle brother they were just inseparable they did so much together and they built planes together (model) and flew them together and lots of stuff.  But aside from that, Steve was in a really good place with his mental health. He was halfway through writing an album, he was talking to Chris Holmes on Sunday evening to talk about him doing a guest slot on one of the tracks. Steve had so many ideas written down. There's were tours that were coming up, he had a new manager. There was shows in Japan, Australia, New Zealand, all of these were coming up next year he was supposed to do. South America again in November. Keep It True Festival in end of September 2022. So much going on and we have plans but actually inside he was actually quite unwell and we didn't realize. He didn't die worrying, he died happy and he wasn't in pain because he went in his sleep it was instant the doctor said it was an instant death. He literally just went to sleep and didn't wake up and then I just found him lying in his usual place when he had a nap. His diabetes was quite bad on and off so we did kind of have the odd naps throughout the day when he could. He just had one of his morning naps before going out and he just didn't wake.

"It's been.. yeah it's been just over a week now, it's last Monday that happened. I'm still getting my head around it it's quite tough it feels like he's on tour at the moment especially because there's other videos and photos that people are sharing and it's almost like that was last night's gig so I'm still trying to process it all at the moment.

"It wasn't the diabetes that got him he had problems with his heart. He didn't have a heart attack, when he died but it was issues with his heart but it's known with people with diabetes. It's unfortunate, it goes hand in hand and you have to extra look after your heart even more so when you've got an illness like diabetes because you've got a higher risk of blood pressure problems which causes problems with the vessels and heart disease.

"And then there's the life of a rock and roll star in the 80s which is always going to take the toll on you later on in life. I think he and the Reaper boys enjoyed the 80s very much. There had been warning signs again connected to the diabetes, but we just weren't aware of how severe how severe things were and like I say, I am pleased because I wouldn't have left his side. I wouldn't have slept because I would have been so worried and he wouldn't have been able to relax because he would have been worried that he could go any day.

"The doctor said actually he lived a lot longer than he probably should have done so we're kind of looking at lots of positives that we had him longer than perhaps medically we should have. Steve didn't know what was going on and he didn't know he was ill and he died a completely pain-free death. He always said to me that his ideal death was dying on stage which he nearly did in Ecuador. He did say he wasn't scared of dying, it was just how we were dying and in an ideal world he would just want to go to sleep and not wake up and that's what he did. There was there an official reason, the doctors  said it was due to some heart issues. I can't recall the technical terms on the death certificate but has to do with heart disease basically but it's some technical terms, it's not heart attack. I've had many messages from people asking me was it COVID related and did the vaccine kill him? No to both of those."

Steve's Grimmett's funeral will be held on September 7, and will be live-streamed. Watch below for further details, and visit here to help with funeral costs.

Remaining members of the Steve Grimmett's Grim Reaper band, will play a special tribute show at this year's Keep It True Rising festival, that will take place in Wuerzburg, Germany from September 30 to October 2.

The band will be joined by Steve's son Russ Grimmett, who will sing few of his father's songs, the Jag Panzer and Titan Force singer Harry Conklin, and other guest singers. Joining the band will be also the original Grim Reaper guitarist and founder, Nick Bowcott.

Expect hat festival organizers will produce and give away for free 2,000 buttons with Steve Grimmett, and will produce special tribute t-shirt, with all proceeds to be given to Steve's family.

This year's edition of the Keep It True Rising festival will be headlined by Saxon and Venom Inc., and the line up will be completed by other New Wave Of British Heavy Metal acts such as Diamond Head, Paul Di'anno's band, Blitzkrieg, Avenger, Saracen, Satan, Quartz, Cloven Hoof, Holocaust, Demon Pact, Tytan and Mythra. Also appearing will be legendary american band Riot V, and several young bands such as Riot City or Konquest. 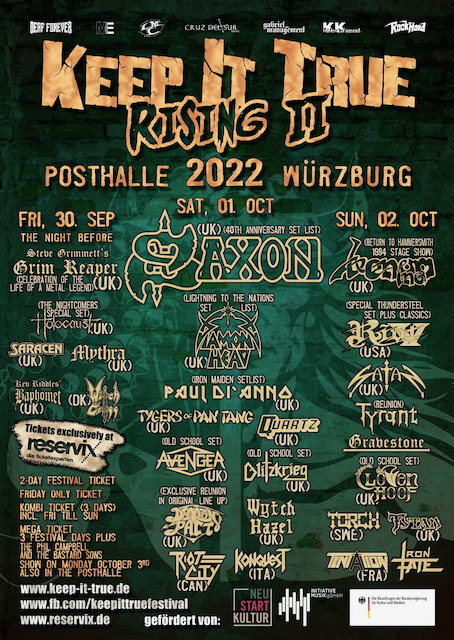