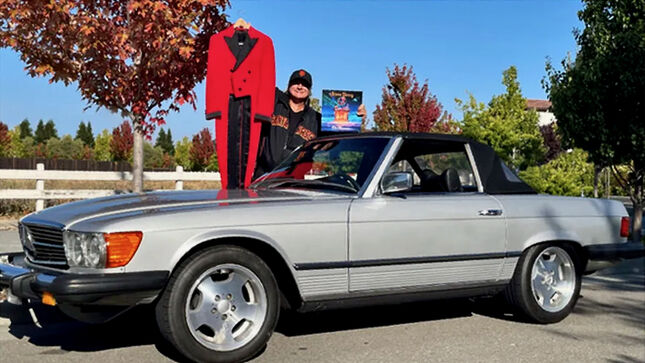 A message states: "This is your chance to bid on a 1979 Mercedes 450 SL convertible owned by Steve Perry, formerly of Journey. He has long been an inspiration to Giants fans and we are grateful for his dedication to the Giants Community Fund."

Further Information: Steve Perry is the original owner of this classic, and it was his favorite car. He would drive it to and from all the Journey writing, recording, and rehearsal sessions back in the day. Many songs were written by Steve while driving this car. Steve called it "Windshield Song Writing."

Included in this package:

Proxy Bidding is available now, or you can bid during the LIVE Internet Auction starting at 9 AM on Thursday, September 23, 2021.

Proceeds from the auction will directly support the Junior Giants program, which provides a free, noncompetitive baseball and softball program for nearly 24,000 kids, ages 5-18 years old, across 88 leagues in under-resourced communities. Working together with local agencies, families and volunteers, Junior Giants provides assistance to targeted community initiatives in the areas of Education, Health and Violence Prevention.

Further details and photos can be found here.

Steve Perry returns with The Season: an exquisitely curated holiday album that reveals him as a flawless interpreter of the classic Christmas songbook.

Pre-order here, and listen to "I'll Be Home For Christmas" below.