STEVE VAI - "I Played The Accordion; That's Actually Where I Learned How To Read Music And Started Writing Music" 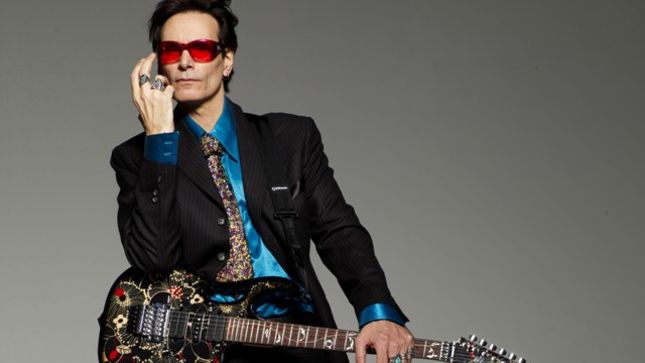 Gary Levine at the Lee Herald recently caught up with guitar legend Steve Vai for a career spanning chat. An excerpt from the story is available below.

Levine: I’ve very recently interviewed two other musicians born to Italian immigrants…Dennis DeYoung and Neil Giraldo, Pat Benatar’s husband and lead-guitarist. Dennis and Neil had accordions thrust upon them by their parents so they could play for the family after returning home from church. Dennis and Neil, thankfully tossed their accordions and learned keyboards and guitar. What type of influence did your parents have on your pursuit of music and can you play 'Bad Horsie' on the accordion?

Vai: “Bizarrely enough, the accordion…it was thrust upon me…when I was nine years old.”

Vai: “No, I played the accordion. That’s actually where I learned how to read music and started writing music. I was playing 'Arrivederci, Roma'. It must be a Long Island Italian thing, you know? But, yes, I went through three different accordions. A part of me hated it. And my father used to make me practice a half-an-hour a day. I just hated it. Parts of it, I liked. I liked playing whatever I wanted on it. But I didn’t like having to play what the teacher wanted me to play.”

Levine: You can’t play 'Bad Horsie' on an accordion...

Vai: “No, but I did figure out 'Smoke on the Water'. And I remember when I was 12, I asked my father if I could quit. He said ‘yes’ and then I started playing the guitar. He got worried because I was playing the guitar like nine, 15 hours a day. It’s all I did. That’s pretty funny.”

Vai recently posted the following message to his fans:

"Hey Folks, Steve here. My friend and brilliant composer, Jason Becker, is working on a new record and he is raising funds through this campaign through this link. Jason is a living phenomenon. As many of you know he is stricken with Lou Gehrig disease and can virtually only move his eyes. His kind heart, inspired inner musical ear and gargantuan vision and drive sets him apart.

He has given the world an example of the potential of the human spirit's ability to flower under the most debilitating of situations. I’m honored to support his new work. Every note he writes and records is a testament to the powerful creative impulses of the universe."

Jason Becker is one of the world’s most precious talents and true warriors. Becker has written a full album of amazing music to be performed and recorded by many of his peers.This album will comprise of a few compositions that have been waiting for this moment to be recorded, to many new pieces recently written. To accomplish this, Jason needs your support. Be a part of this album.