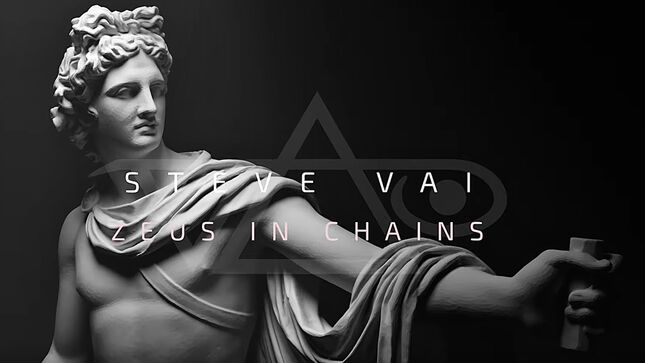 Steve Vai and Favored Nations / Mascot Label Group present an official visualizer for “Zeus In Chains”. The composition is featured on Vai’s upcoming studio album, Inviolate, which will be released digitally and on CD January 28. The LP will follow on March 18.

Steve Vai shares, “The title for this track ‘Zeus In Chains’ was told to me by the track when I was listening back and asked it… ‘What’s your name’?  This happened during the heavy guitar breakdown with the dissonant high note that happens right before the solo. It sounded like Zeus in Chains. Hey, it’s art. You can make up anything you want and it’s legitimate.”

Over the course of a more than 40-year career, Steve Vai has routinely transformed what would appear to be outrageously impossible into something very, very possible... and still also pretty outrageous. From his days as Frank Zappa's "stunt guitar" player to his more recent expansive and exploratory solo work, Vai has continually challenged notions of traditional guitar playing and composition - and on more than one occasion even reimagined the very instrument itself.

Vai’s newest and 13th solo album, Inviolate, is a nine-song opus that pushes the boundaries of instrumental guitar music. The body of work presents his most focused, streamlined and perhaps invigorating music in years. “It’s very ‘Vai,’ whatever that means,” he says, and then laughs. “Someone else might be better than me at explaining what that is. But it’s just very honest music. Because a lot of my records, they're long and there's a lot of concepts and playing around with stories. This one has none of that. This is nine pretty dense all-instrumental compositions that I wanted to capture and record so I could get out there and play them live for people.”

In essence, it all comes down to finding your own voice, and then having the courage and conviction to follow your musical and creative instincts wherever they may take you – something Vai has never been shy about in his playing. “One of the great things about the guitar is you don't need to be a virtuoso to express your creative vision,” he says. “I mean, Bob Dylan plays the guitar perfectly well for his expression. So does John McLaughlin. You just need to decide how much technique you want or need to get there. For myself, I came out of the chute wanting and needing it all. When it comes to my music, I don’t feel like I have to prove anything or conform to anything. I just love to think up creative ideas, and then use whatever skill I have to manifest them.”

“An inviolate inspiration is one that comes to you completely pure,” Vai explains. “It appears almost in its completeness, and there’s a recognition of it as being right for you – perfectly right for you. There’s no excuses in it. There's no fantasy in it. There's just a recognition of ‘yes.’ And then you capture that in a way that’s authentic to your unique creativity. Hopefully, that’s what I’ve done with this record.”

Inviolate, available on January 28, is now available for pre-order in various formats, here.

Vai’s Inviolate tour will begin at House Of Blues in Las Vegas on January 27, and wrap in Los Angeles on April 2 at The Theatre at Ace Hotel. For tickets, visit Vai.com.

This run is the first excursion of many planned which together are a multi-faceted World Tour that will bring the guitarist and composer to most continents across the globe touching down in dozens of countries. Vai has been working on a new studio album and those details will be shared imminently. These appearances will present an all-new show featuring a lot of new music, with plans for performances to be staged for the next several years.

Vai shares, “A performer thrives on performing.  It’s been my life for the past 49 years, with the exception of the last two years, so we are chomping at the bit to get out there and play for people. A music concert has the ability to dissolve the many challenges we face, and celebrate one of the good things in life, live music.”