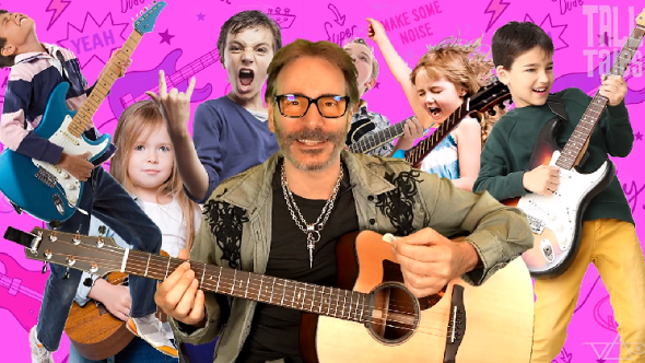 Guitar legend Steve Vai has checked in with a new Patreon video, along with the following message:

"From my Tall Tales series on Patreon comes this clip, 'I Can’t Stop'. We wanted to present the whole thing here. Watch it all the way through for a really good laugh, and check out over 50 other exclusive videos by signing up on Patreon."

Vai is featured in a new interview with Guitar World, where he looks back on his days working with Frank Zappa at the start of his career. An excerpt is available below.

Guitar World: How did you get to know Zappa?

Vai: "I was so innocent and naïve. I was a kid that grew up in a teenage bedroom on Long Island listening to the progressive rock music of the '70s, but had an interest in composition from a very early age. And I discovered Frank. When I moved out to California, it was a bit of a shock. It was so exciting and so interesting. And then I got an apartment right down the street from Frank, so I was constantly in the Zappa world. A week later, I just started going up to the house and then that was it."

Guitar World: He was renowned for being very tough in the rehearsal room. Did you experience that?

Vai: "The level of excellence that you needed to be at was such that if you didn’t have the goods, you didn’t last. And Frank expected everybody to rise to the occasion. One of the brilliant things about Frank was he had the ability to totally intuitively read your potential. And each musician that he hired for his band had to have something that they could do that was somewhat extraordinary. You had to be a great singer or a great player, whatever it was that you did. That’s what he expected from you. He wouldn’t expect you to do things that you couldn’t do because that wouldn’t work for him. So it didn’t work for you. So ‘tough’ is an interesting word to apply to Frank. He was demanding, but he didn’t demand things that you couldn’t do."

Guitar Wprld: You played on possibly the most technically difficult of all Zappa’s pieces, "The Black Page", earning you the title of "Stunt Guitarist" in the band.

Vai: "I think he was just interested to see how far he could take me with playing crazy stuff on the guitar. But the things that I did with him that I think he got the biggest kick out of was 'The Jazz Discharge Party Hats' or 'The Dangerous Kitchen' or 'Moggio' or 'RDNZL' or 'Drowning Witch'. These are all pieces of music that just had an uncanny type of guitar expectations."