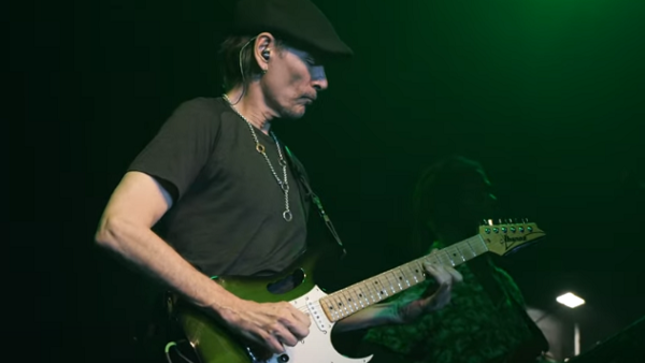 Germany's Thomann Guitars & Basses have shared a new live rig video clip. Check it out below.

Thomann: "We had the honour to check out Steve Vai's live guitar rig together with him and his two great techs, Doug and Thomas, during their 2022 Inviolate European tour. The rig is a form of art in itself - the sound integrity and cable management - including the Hydra routing - is pretty impressive."

Vai will bring the Hydra out on tour, and perform the jaw-dropping solo piece “Teeth OF THE Hydra’, as early as the end of the year, so says the guitar god in a brand new chat with eonmusic. Vai made the revelation while talking to eonmusic at Hellfest in Clisson, France, on June 23.

Vai’s comments came during a press conference ahead of his appearance at Hellfest’s 15th edition. In a day of revelations, the celebrated player also went on to perform with former boss David Coverdale and Whitesnake during their set, for the first time in three decades.

Asked by eonmusic if he had been tempted to perform “Teeth Of The Hydra” - the solo piece that caused a stir when its video was released back in March - during his live concerts, Steve said that it had indeed been the plan.

“Well, I was absolutely determined to bring it out”, he said emphatically. “That was part of the plan, but what happened was, about a year and a half ago, I had to get my shoulder fixed, and it takes like a year to heal. And halfway through it, I had another tear and I had to get it fixed again”, he admitted.

Going on to reveal that he recorded both the song, and the one-man video in between surgeries, the former David Lee Roth man said; “Before that, I wanted to complete ‘Teeth of the Hydra’; the song, and the video. So, the song took about six weeks to carve out, you know, and then I knew I had to make a video because that’s where all the enjoyment is, in watching, and seeing it”.

Talking about the physicality that performing on the one of a kind, unconventional three-necked hybrid instrument demands, Steve revealed; “It was difficult because it’s a heavy instrument, and I use a strap that goes around my waste, so all the weight is on your legs. And it doesn’t move like a guitar; it doesn’t go ‘this’ way, or ‘this’ way, and if you move, the Hydra thinks you want to go all the way over there!

Regarding the recording of the track’s video, he confessed; “I struggled through getting the video complete, and two days, three days after I shot the video, I had the shoulder surgery, and that was three and a half months ago”.

All of which has meant that the Hydra hasn’t made its live debut… yet! “I couldn’t play the Hydra for this [current] European tour as it takes like a year to heal, but I was absolutely determined to take it, because I can play it, absolutely!”, he said, adding; “Of course I’m disappointed I couldn’t bring it, but I can’t play it right now”.

The story won’t end there however, and the Hydra will make its live debut, possibly as soon as Vai’s US tour, which begins in El Cajon, California on September 28; “I’m expecting that, in the fall [crosses fingers], I should be ready to go”, he opined, adding; I’ll probably be doing another swing through Europe in ’23, and I hope to have it then too.”