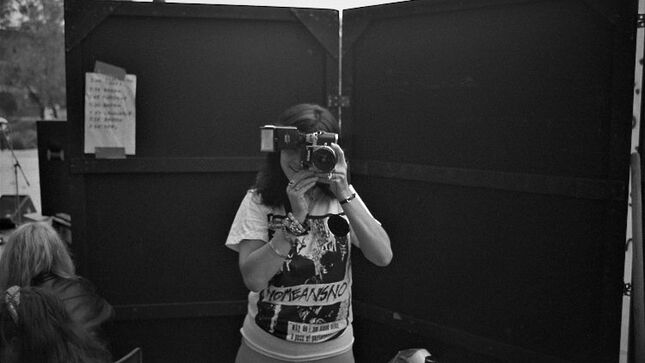 Moving from LA to DC in 1989, Naomi became a bi-coastal troubadour and continued documenting powerhouse artists during her time working at the legendary 9:30 Club. In 1994, after just twelve short years, Naomi shockingly retired from photography and wouldn’t take another photo until three years later, shooting her last known images.

“Naomi’s work is timeless and iconic. It is a true gift to all music and photography lovers around the world. Her personal story as an artistic underdog is an inspiring, powerful one that I am honored to help share.” - Ash Avildsen, Sumerian CEO

“I’ve always been transfixed by Naomi’s body of work and her dynamic style of shooting, but after learning more of her personal story and her quiet battles with mental health I believe Naomi Petersen will resonate more with current generations than she ever has before.” - Ryan Anthony Menge, Sumerian VP of Creative

2021 saw Naomi Petersen’s influence reach new heights due to her photo inclusions on Dave Grohl’s TV Show “What Drive Us,” a high-profile collaboration with street artist Shepard Fairey, and droves of SST fanatics coming back full circle to pledge their allegiance. Tragically, Naomi passed away at age 38 on June 13, 2003 and is no longer around to see the impact her photos have made to the music world. As the artists she photographed live on forever in her images so does Naomi in the memory of her works.

“When I walked into Chris Petersen’s (brother of Naomi) home in Northern California and peered into a time capsule of archives I saw a chilling glimpse of Naomi’s incredible journey and developed an instant commitment to get her story told. Ash, Ryan and the Sumerian Comics team are the ultimate partners to come in and show Naomi Petersen’s beautiful life to the world.” - Sean E. DeMott of Execution Style Entertainment

Future plans for Naomi’s story and archive are to be announced soon.