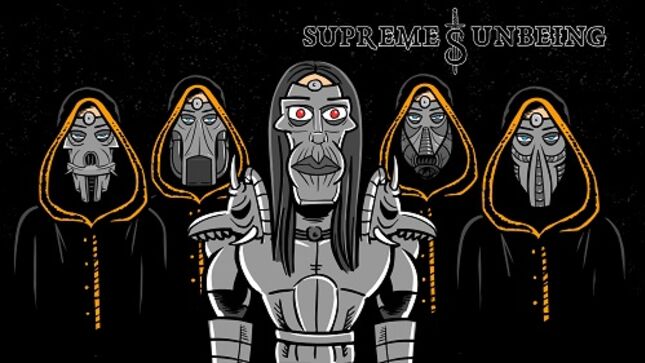 Supreme Unbeing was a mysterious four-piece metal band led by vocalist / prophet Zac Red, with his fellow prophets D.Vine (lead guitar), Unknown (bass) and Al Mytee (drums), that is, until today, when the fifth seal was opened, and the band announced the addition of a fifth member – rhythm guitarist D. Sciple.

Although the members of Supreme Unbeing are yet to be seen in the flesh, only appearing through their animated visages, nonetheless, the band has made their mark here in the physical domain with their full-length debut album Enter Reality (released October 2020) already surpassing  over 2 million streams The animated music videos for the singles "You'll Never Make It" and "Animals" now have in excess of 3 million views on YouTube.

“Hailing from the same corner of the universe as D.Vine (lead guitarist), the two found chemistry and struck a chord instantly as melodies and riffs started flowing through their amplifiers during their first shredding session. In some ways, D.Sciple could be viewed as the younger version of D.Vine, with qualities and skills that are yet to be fully refined. Nonetheless, with the addition of D.Sciple, D.Vine will be alleviated from playing multiple guitars simultaneously in the future when the band plans to performs in the physical domain,” says Zac Red of Supreme Unbeing.

Supreme Unbeing, now a five-piece, recently released three bonus tracks “At The End Of The Day (Animals Acoustic)”, “I Can’t Help You (The Realm Version)” and “Everything’s Unreal (Dreaming Acoustic)”. The band will now retreat from the physical plane to the Realm for a short while to finalize their second album. But rest assured, the prophets of Supreme Unbeing will come forth with another face-shattering announcement soon enough.

“He can play the guitar, but he has never played the fiddle, with this announcement his identity is no longer a riddle. We hereby induct prophet D.Sciple as the fifth Prophet of Supreme Unbeing,” concludes Zac Red of Supreme Unbeing.