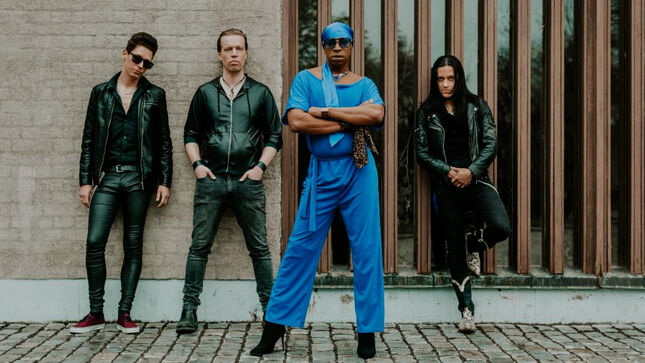 Frontiers Music Srl has released the official debut single from Sweden's Fans Of The Dark, entitled "Escape From Hell". The band is one of the most exciting things you'll hear emerging from the fruitful hard rock scene in Sweden, showcasing a tight, inventive musical approach with absolutely outstanding vocals.

"Escape From Hell" can be streamed on your preferred music service here. Listen via the YouTube clip below.

The song features a special guitar solo appearance from Alice Cooper guitarist Ryan Roxie. Ryan and Fans Of The Dark drummer Freddie Allen had previously collaborated on another project, so Freddie reached out to Ryan asking if he would be willing to add some of his guitar magic to the track, which he indeed has.

This single was mixed and mastered by Mike Palace (Palace, Kent Hilli), who will do the same for the band's full-length debut. Frontiers anticipates releasing the band's debut album in late 2021, so stay tuned.

Fans Of The Dark is an exciting new band formed in the summer of 2020 by Freddie Allen, drummer and main songwriter, and lead vocalist Alex Falk. Bassist Robert Majd (Captain Black Beard, Metalite, Nighthawk) and guitarist Oscar Bromvall (Palace, Code Red) round out the lineup. Freddie and Alex went to high school together in Stockholm, Sweden and after a few years reconnected recently with a vision to create a band which would mix the melodies and approach of classic and melodic rock with elements of the great metal music of the '80s.