TED NUGENT Explains NRA Board Resignation - "I Will Indeed Be In The Heat Of Battle On The Not So Main Streets Of America Every Damn Day, As Always" 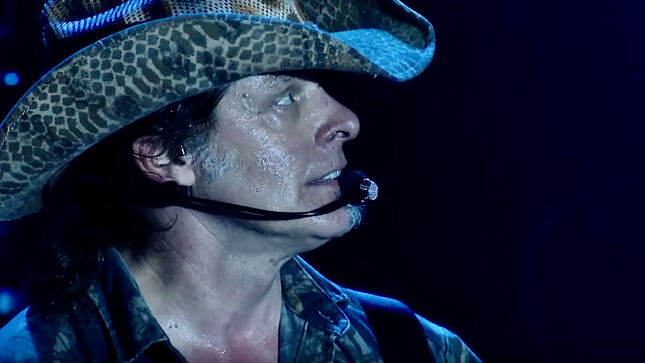 Last week, Bloomberg reported that Ted Nugent is resigning from the board of the National Rifle Association after 26 years.

Nugent, who once recorded a song titled “I Am the NRA,” is stepping down “due to ongoing schedule conflicts,” according to a July 29 memo from General Counsel John Frazer reviewed by Bloomberg News. Nugent, has served on the group’s 76-member board since 1995, according to a website that tracks the gun group.

Nugent has since published the following statement via his social media accounts:

"Dear Fellow NRA Board of Directors, Members, Friends and Second Amendment Warriors: The time has come for me to face the dangers of burning the candle at both ends.  I have been honored and humbled to represent all those great Americans that voted for me to serve on the NRA BOD for the last 26 years, and will not only continue my calling to fight for the return of the Second Amendment, but to actually increase my exposing and crushing those evil forces who would deny such basic freedoms to Americans.

"I was not voted onto the board as an accountant, administrator, paper shuffler or bureaucrat, but rather to lead the charge of the good guys against the bad guys in this vile culture war that has reached a deafening roar.

"I salute you and thank you for your never ending dedication to fight for our right to keep and bear arms, and though not sitting on the board with you, I will indeed be in the heat of battle on the not so main streets of America every damn day, as always.

"So due to constant scheduling conflicts, I hereby resign my position on the NRA Board of Directors, wishing you well and Godspeed.