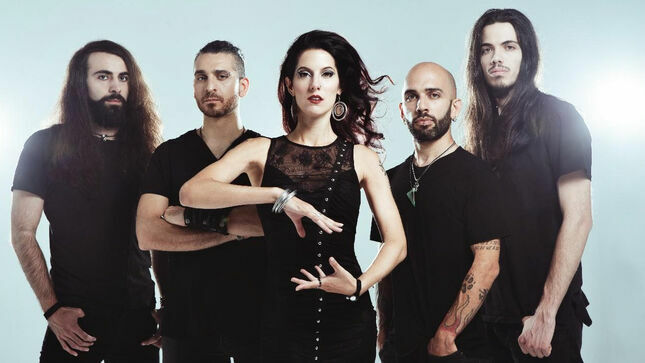 After releasing their vibrant fifth studio album, Viridian, in 2020, Temperance delight their devotees with the persuasive new offering Diamanti, to be released on November 19 via Napalm Records. With Diamanti, the exceptionally skilled Italian outfit once again showcases their extraordinary ability to merge brilliant vocal melodies, hefty power metal guitar riffing, and symphonic soundscapes in perfect harmony - all dressed in modern surroundings. This is an offering that fans of bands like Amaranthe will fall in love with immediately.

The new single, “Breaking The Rules Of Heavy Metal”, breaks in with full force, telling an epic tale and creating a far-reaching sense of common bond. This absolute anthem showcases the powerful strength and energy of all three vocalists Alessia Scolletti, Michele Guaitoli and Marco Pastorino, providing a taste of the upcoming album.

Michele Guaitoli (vocals, piano) on the new single: “If there is one thing that makes Temperance unique on the scene, is that we just don’t care about any commercial rule. We write our music for how we like it. We don’t ask ourselves “will this work?” We don’t question our songwriting putting it in relation of the market. This attitude is the same that we have when it comes to accepting limits: we don’t accept the idea of having limits. We are here to break the rules. Why just one singer? Let’s have three. Why just a style? Let’s play many. If we want something, we fight for it even if we need to break the rules of a certain scheme. What about heavy metal? Does it have rules? Does it have a scheme? If yes, we’re here to break it.”

A drum playthrough video for “Breaking The Rules Of Heavy Metal” can be viewed below:

Check out the official music video for “Breaking The Rules Of Heavy Metal”:

Diamanti will be available in the following formats: