THE AGONIST To Release Days Before The World Wept EP In October; "Remnants In Time" Music Video Posted 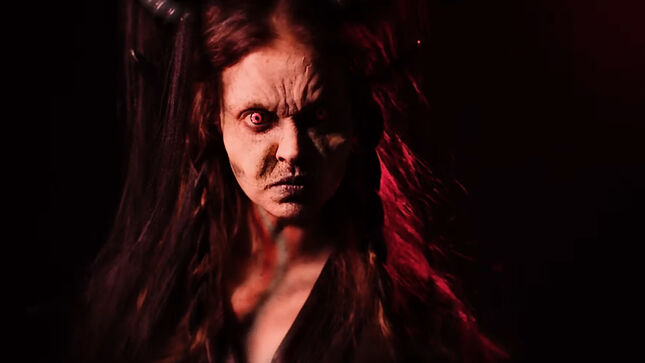 Canadian extreme melodic death metal juggernaut, The Agonist, took the world by storm with the release of their bludgeoning 2019 full-length, Orphans - garnering fantastic critical acclaim and even a revered Juno nomination. With that undeniable skill in tow, The Agonist takes another bold step in their musical and lyrical progression with Days Before The World Wept, a brand new EP out October 15 via Napalm Records.

Get a taste of the band’s newest music today by watching the music video for brand new single, “Remnants In Time”. The death metal burner brings non-stop energy throughout, showcasing Psarakis’ multifaceted vocal attack as she nails searing highs, guttural lows and magical clean passages. Just like the track itself, its haunting, conceptual music video’s imagery blends emotive and eerie imagery throughout.

Frontwoman Vicky Psarakis says about “Remnants In Time” and its stunning video: "‘Remnants in Time’ is the first chapter in this story. It marks the final moments of a person's life and the journey that begins right after. We wanted the visuals to strongly reflect the lyrics and the concept behind them, and transforming me into a demon was key in that. I'm a huge fan of horror/sci-fi and makeup transformations, so working with a professional makeup artist and the use of prosthetics was the coolest part for me! This song - and video - is all about extremes. Angelic and demonic, fragile and strong, delicate and aggressive. It embodies a lot of what The Agonist is about.”

Watch the official music video for “Remnants In Time” below.

Opening track “Remnants In Time” begins ominously with ghostly piano lines performed by lead vocalist Vicky Psarakis before slamming into a double bass, one-woman choir explosion rife with needle-precision guitar work by deft guitarists Danny Marino and Pascal Jobin. The death metal burner brings non-stop energy throughout, showcasing Psarakis’ multifaceted vocal attack as she nails searing highs, guttural lows and magical clean passages in one fell swoop. The onslaught continues with the rhythmic soundscapes of cry for salvation “Immaculate Deception”, blending fast paced, aggressive verses with haunting, melodic choruses. “Resurrection” reaches into blackened territory before Psarakis splits it wide open – annihilating with her pinpointed vocal attack calling for rebirth. In addition to Psarakis, Marino and Jobin, dexterous drums from Simon McKay and the bass attack of Chris Kells lead the listener through metallic melodic passages topped with emotive poetry before breaking into the next track, “Feast On The Living”. It stands tall with rollercoaster clean and gritty vocals, rapid fire drums and blazingly precise guitar leads and solos, cementing the track as one of the most technically meticulous of the entire offering. Shifting into fifth gear, title track “Days Before The World Wept” brings it all home, beginning with a beckoning acoustic introduction before roaring in with intense blastbeats, polyrhythms and bellowing screams. The Agonist pulls out all the stops, showcasing their chops in all directions with breakneck instrumentation and staggeringly superb vocal approaches. Soaring through a kaleidoscope of blistering metal mastery and hopeful lyrical dramatism, the opus dominates as one of the most impressive works of the band’s catalog.

Psarakis adds about Days Before The World Wept: “There's a lot I could say about this EP and its importance to the band, but does it matter? Obviously, this is the part where I tell you these are the best songs we've put out to date. Honestly - it's a journey. You're either gonna reach the end and want to relive it or you're not... and that's okay. Let the music speak for itself.”

Days Before The World Wept will be available in the following formats: