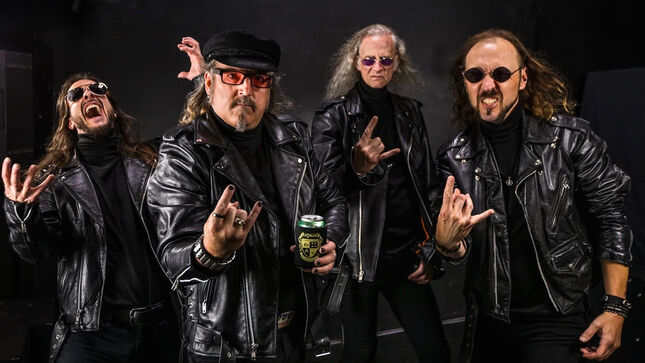 World renowned mash-up (bash-up) metal phenomenon, Beatallica, have confirmed they will release their fourth studio album (their first since 2013) via Metal Assault Records.

In late 2020, Metal Assault Records very excitedly added Beatallica to their official label roster. MAR owner Andrew Bansal was first introduced to Beatallica in 2010 when the band toured the West Coast and performed at the now defunct Key Club in West Hollywood; putting on the kind of performance only they can. Subsequently, Bansal interviewed Beatallica and kept track of their progress over the years as they took their show on the road all over the world, garnering a global fanbase to go with the heaps of praise received from members of Metallica and the like, as well as from journalists everywhere.

Fast forward to 2021, Beatallica is signed to Metal Assault Records and the label will release their long-awaited fourth studio full length offering, The Devolver Album on CD and digital platforms on November 12. A music video for the album's lead single "Wherever and Everywhere" is set to premiere on October 1 on the band's YouTube channel, along with the pre-order launch of the album in the aforementioned formats on beatallica.bandcamp.com. All digital and physical album pre-orders will come with an instant download of the lead single.

On the arrival of The Devolver Album and what to expect from the new release, the band issued the following comment: "Beatallica are stoked to finally be releasing The Devolver Album after many years of arranging, re-arranging, and deranging concepts! Our relationship with Metallica has been a blessing and we thank them for their support and allowances. The Devolver Album will have all the elements of past Beatallica recordings plus more. Listeners will pick up on the mash-up between original music and lyrics and Metallica compositions along with Beatles sensibilities, style, and influence. Thrashy, heavy, clever, subversive, and hesh, of course! Beatallica are made up of highly experienced song writers and we had a great time working in original material on this release. Our first single and video for "Wherever and Everywhere" will be out soon. Beatallica are pumped to be working with Metal Assault Records and we look forward to playing live, in support of The Devolver Album, before too long!  Info and show dates can be found at beatallica.org and merch will be at beatallica.bandcamp.com. Hells yeah!!"

Produced by Beatallica, The Devolver Album was recorded at Hamtone Audio and engineered by Jeff Hamilton and Lodi Broekhuizen. Mixing and mastering duties were handled by Flemball Rasmartin at Shane Olivo Audio and Justin Perkins at Mystery Room Mastering respectively. The incredible artwork featured on the cover of The Devolver Album was created by Matt Wells of lizardmanart.com

On the live front, Beatallica is set to perform at the gigantic Summerfest in their hometown of Milwaukee, Wisconsin this Saturday September 18. More concert dates will be announced in the near future, as the band gears up to perform “Wherever and Everywhere” in support of the new record.

Forged from the influences of two of history’s greatest bands, Beatallica are the world’s first live mash-up or “bash-up” band. Their wit, creativity, subversiveness, and flair are as sharp as the point they make. Beatallica destroys the boundaries of creativity and reveals how original compositions of music can be crafted for those who identify with humor and biting commentary. All the while, they show appreciation and reverence to The Beatles and Metallica, grandfathers of their respective genres.

Beatallica have chalked up appearances with Sammy Hagar, Clutch, members of Mastodon, Jerry Cantrell and Billy Duffy, Motorhead, Testament, Steven Adler of Guns and Roses, L.A. Guns, Sepultura, and many more metal/rock favorites. They have reached headlining status for open-air festivals in both the United States and Europe. A stop in Busan, South Korea and press throughout Japan, South America, and Australia highlight the extent of Beatallica’s international stronghold. Beatallica’s websites have sustained millions of hits and the band’s presence continues to grow at a rapid pace. Peers who make their living in the music and media professions have lauded the band’s continual efforts of musicianship, solidarity, comedy and originality.

Beatallica continues to change the face of music on the internet, in live settings, and over radio waves around the globe. They flourish with music lovers from all areas of the world at their side. Throw your fist high into the air, become a "Beatallibanger," and open your mind to a one-of-a-kind brand of musical mayhem!