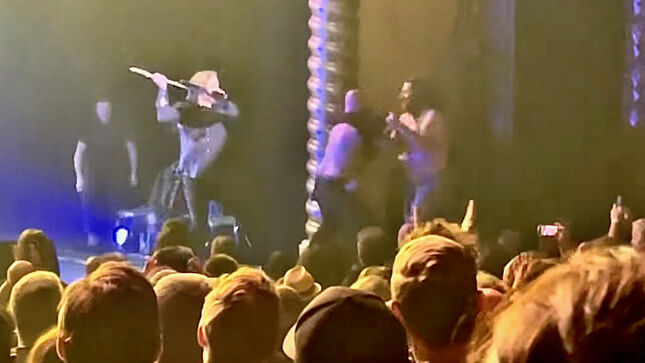 During The Black Crowes' concert on Sunday (November 20) in Melbourne, Australia, a fan invaded the stage just as the band started performing "Stare It Cold". With security in chase, the fan approached centre stage, where singer Chris Robinson took a swing at him with his mic stand. As the invader moved to the left side of the stage, guitarist Rich Robinson raised his guitar and slammed the man in the upper chest area, then shoved him from the stage. Video of the incident can be seen below:

The Black Crowes will return to Las Vegas on Super Bowl weekend for a limited two show run, February 10 and 11, at the Pearl Concert Theatre at Palms Casino Resort. Tickets at TheBlackCrowes.com.

The Black Crowes' will close out 2022 with a December 15 performance at Coca-Cola Roxy in Cobb County, GA.