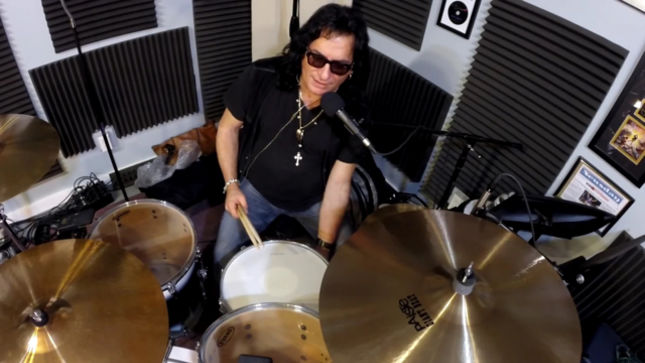 Could there be two more disparate musical genres than punk and prog metal? And, could those oil and water categories ever mix? The answer… The Last Ditches, a respected prog metal rhythm section meets 'Real Deal' CBGB/Max's Kansas City guitars and singing.

The Last Ditches sprang into being thanks to the animal cunning and persistence of funk metal bassist extraordinaire and studio owner, Randy Pratt. See, Randy had a deep conviction that he, along with actual no-kidding punk legend, New York's Heartbreakers' Walter Lure, The Planets' long time guitarist, Binky Philips, and another genuine music icon, Rainbow and Black Sabbath's master prog metal drummer, Bobby Rondinelli, would make an amazing sound together; a blending of two rock styles that usually want nothing to do with each other. It took over four years to prove his point, but, Randy was oh, so right.

For those who need a remedial, Walter Lure was “the other guitarist” in Johnny Thunders' Heartbreakers, rightly considered one of the Top Five All Time Great Punk bands. While the toxically charismatic Johnny took up most of the spotlight, Walter's guitar playing made up the bulk of the band's incredible music, as did Walter's songwriting. To wrap Walter's justified legend up in one neat sentence… “Walter Lure also played un-credited guitar on four albums by The Ramones.”

Ask any serious drummer playing arena-recording level drums and they will all not only know who Bobby Rondinelli is, chances are, they own some of his world famous instructional DVDs. World Famous is not glib here. Mr. Rondinelli travels the globe giving sold out drumming seminars in Tokyo, London, Scandinavia, Moscow. In addition to Bobby being a member of Ritchie Blackmore's Rainbow for their albums Difficult To Cure (1981), Straight Between The Eyes (1982) and Finyl Vinyl (1986), Bobby recorded and toured with Black Sabbath on and for the Cross Purposes album and two albums and one DVD with Blue Oyster Cult, easily three of the all time most influential metal bands. Mr. Rondinelli's other recordings number in the literal hundreds.

Binky and Randy are decades-long veterans of the New York City Music Scene. Randy played with the likes of The Funky Knights and is currently the harpist in the reconstituted Cactus, yes, that Cactus, and the internationally acclaimed funk-metal band, The Lizards. Meanwhile, Binky, who, back in the day, shared NYC stages with The New York Dolls, KISS, The Ramones, Blondie, et al, has stuck to his Planets guns all this time while writing a weekly column for Huffington Post. Tommy Ramone even called Binky “a virtuoso”.

Every aspect of The Last Ditches' music (Walter Lure came up with the name), are extraordinarily successful examples of kitsch painter, Bob Ross's Happy Accident approach to art. All thirteen songs on Spilt Milk were learned on the spot in the studio and recorded the moment “the ducks lined up”. Adding to the immediacy of the basic tracks, in every case, all the many guitar overdubs were cut with nothing worked out in advance, ever. What Walter and Binky achieved was almost entirely by instinct, attitude, and a strong musical empathy. This is music for guitar freaks. Bobby and Randy laid down over-the-top granite-hard fist-tight foundations for Walter and Binky's careening guitars and voices. The band's dear pal, Paul Gifford, added gorgeous harmony vocals.

Eight of the thirteen songs recorded were written by Walter and Binky and Randy, expressly for the Spilt Milk album. The remaining five cuts are from untapped back catalog.

It is The Last Ditches' great good fortune (and yours) that this project was headed up by the dazzling Master Engineer, JZ Barrell (who shares Producer credit with Binky) behind the recording console. The band's magic might have been accidental, JZ's was emphatically not. The truth is, everything took so damn long and at times seemed to be happening in a vacuum, that The Last Ditches themselves had no idea they had recorded such an utterly visceral and exciting rock and roll album until JZ finished it.

The Last Ditches’ Spilt Milk will be released on Hyperspace / Rocker Records. More details to follow.