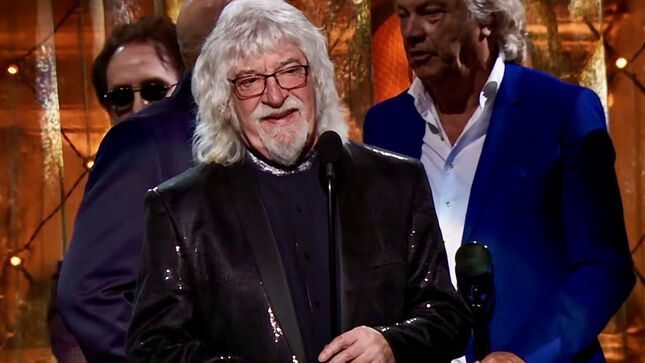 The Moody Blues drummer and co-founder, Graeme Edge, has passed away at 80 years of age. The band's frontman, Justin Hayward, posted the following via the band's official website and Facebook page:

"It’s a very sad day. Graeme’s sound and personality is present in everything we did together and thankfully that will live on.

When Graeme told me he was retiring I knew that without him it couldn’t be the Moody Blues anymore. And that’s what happened. It’s true to say that he kept the group together throughout all the years, because he loved it.

In the late 1960’s we became the group that Graeme always wanted it to be, and he was called upon to be a poet as well as a drummer. He delivered that beautifully and brilliantly, while creating an atmosphere and setting that the music would never have achieved without his words. I asked Jeremy Irons to recreate them for our last tours together and it was absolutely magical.

Graeme, and his parents, were very kind to me when I first joined the group, and for the first two years, he and I either lived together, or next door to each other – and despite us having almost nothing in common, we had fun and laughs all the way, as well as making what was probably the best music of our lives.

Graeme was one of the great characters of the music business and there will never be his like again.

My sincerest condolences to his family."

The Moody Blues bassist/vocalist, John Lodge, shared the following via social media: "“When the White Eagle of the North is flying overhead” …sadly Graeme left us today. To me he was the White Eagle of the North with his beautiful poetry, his friendship, his love of life and his “unique” style of drumming that was the engine room of the Moody Blues… I will miss you Graeme…."

According to his biography on The Moody Blues' website, Graeme Charles Edge was born on March 30, 1941 in Rochester, Staffordshire, and at the age of six months his family returned to Birmingham. His mother was a pianist for the silent movies and his father, grandfather and great-grandfather were all music-hall singers.

Graeme trained as a draughtsman but soon went into music full time. He never started out to be a drummer, he was, in fact the Manager of a group called the Blue Rhythm Band – in those days a Manager of a group was somebody who could move the equipment about and had a house big enough for the band to practice in. Graeme always watched the drummer in the group and fooled around on the drums, but never really drummed professionally until that drummer quit and he had to fill in. He played with the group for three weeks until a replacement was found and then bought his own kit and went to work in earnest.

The first band that Graeme formed was the Silhouettes and The Blue Rhythm Band. He then helped to form Gerry Levene and the Avengers, who recorded one single for Decca, “Dr. Feelgood/It’s Driving Me Wild,” and appeared on TV in “Thank Your Lucky Stars.” The group included Graeme, Spike Hopkins, Johnny Marshall, Gerry Levene plus one other band member.

Roy Wood (later to join The Move and Wizzard) played with the band for a short time. When this group collapsed in April 1964 Graeme formed The R & B Preachers, which included Denny Laine and Clint Warwick, and when that group disbanded the three of them linked up with Ray Thomas and Mike Pinder to form The M & B 5, which later, of course, changed its name to The Moody Blues.

During the Moodies’ break in recording and touring, Graeme released his first solo single recording in 1974 – “We Like To Do It/Shotgun” – and in 1975 released his first solo album “Kick Off Your Muddy Boots,” together with the single “The Tunnel/Bareback Rider.” He lived on the Greek island of Corfu in his 70ft yacht, Delia, and during his ocean-going voyage around the world, he became particularly enamoured with the salsa, calypso, samba and reggae beats when he visited the Caribbean. The voyage helped to inspire his second solo album “Paradise Ballroom,” released in 1977 together with a single “Everybody Needs Somebody/Be My Eyes.”

In the mid-80’s, for a short period, he did occassional work with a band called Loud, Confident and Rong, a part-time jazz combo made up of several respected musicians who played in various London clubs, including The Marquee. However, he has continued as the drummer for The Moody Blues since they got back together in 1978 to record the album Octave.

Graeme drums with a precision beat while spicing the Moodies’ sound with a wide range of percussion instruments. When away from the spotlight he lists his hobbies as sailing, golf, war films and sci-fi – Graeme is a confirmed Trekkie.