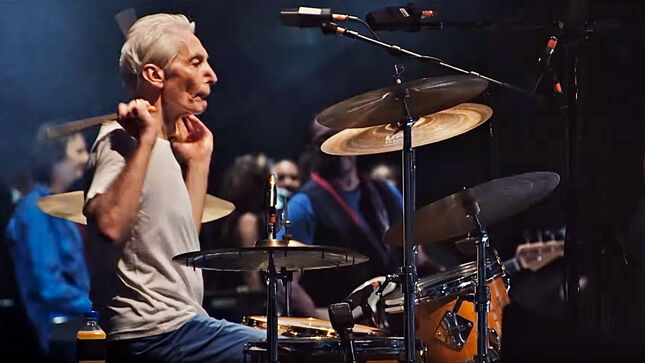 According to Deltaplex News, a new official biography about late Rolling Stones drummer Charlie Watts, authorized by the band and Watts’ family, is scheduled to be published on October 11th.

Charlie’s Good Tonight: The Life, the Times and the Rolling Stones includes forewords written by Stones co-founders Mick Jagger and Keith Richards, as well as an introductory section penned by the band’s early manager and producer, Andrew Loog Oldham.

The book was written by Paul Sexton, a veteran British writer and broadcaster who has covered The Rolling Stones for more than 30 years. Charlie’s Good Tonight features interviews with Jagger, Richards and longtime Stones guitarist Ronnie Wood, as well as with various friends, family members and musical collaborators.

The book will offer an intimate look at famously private Watts, who died of cancer at age 80 last August.

After 60 years on the road, The Rolling Stones have many tales to share, with the band members giving in-depth interviews to the BBC for a new series about the iconic band, reports The Mirror.

BBC series, My Life As A Rolling Stone, begins with a Mick Jagger profile episode at 9.30 PM on Saturday, on BBC2, and continues through July as part of the BBC’s Rolling Stones at 60 season.

All four episodes profiling Mick, Keith, Ronnie and Charlie will be available to watch from Saturday on BBC iPlayer. A video trailer can be viewed below.

On Charlie Watts, in the band’s own words:

Mick Jagger: “I miss Charlie on many levels. Like, I miss wanting to play him this new groove and I want to say how badly England have done in the Test match yesterday. You know, I miss him a lot.”

Keith Richards: ”I am still dealing with it. Charlie was the engine. The best drummer England has ever produced. People like Charlie Watts are very hard to put in a pocket. They don’t make pockets for people like Charlie. He is a totally unique guy.”

Ronnie Wood: “When Charlie passed, we were mind-blown. We have the spirit of Charlie playing with us all the time. One word – particular. Clothes had a layer of tissue paper between each shirt, each sock, each underpant, each jacket. Pristine would be the word. Not one thing out of place.”